Rings of Power: fanfiction or adaptation? 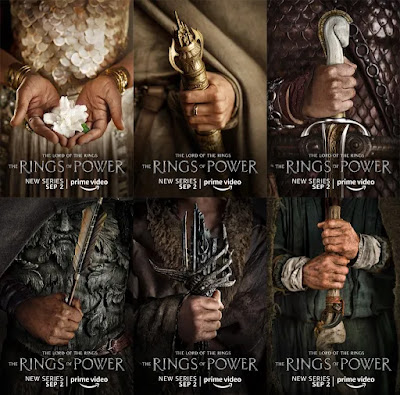 Friends who have been enjoying 'Lord of the Rings: Rings of Power' said I should give the show a proper go. I'd initially tried and abandoned it but at their request I'll do a careful watch and review. My initial impression is that it's reasonable fanfiction but a poor adaptation. "Fanfiction is when someone takes either the story or characters (or both) of a certain piece of work, whether it be a novel, tv show, movie, etc, and create their own story based on it." ('Fanfiction', Urban Dictionary) An Adaptation, on the other hand is a reproduction of a story in another medium (Watership Down the novel, Watership Down the film) or in the same medium but with a new artist (Ben Hur, 1959 vs Ben Hur 2003). Faithfulness to the source material is the key to distinguish an adaptation from fanfiction.

Fanfiction, has a negative reputation, a form of amatuer indulangance ('Fanfic', TV Tropes) but it's a legitimate art form. Fanfiction has way more freedom interacting with the source material, for example the same characters in a new world, different chracters in the same world or entirely new characters in an unexplored or under-developed part of the original world, plus many more variations. An adaption on the other hand is a type of translation, a re-presentation of the original source material. The demands are higher, because the adapting artist is attempting to re-create the original source material.

So is 'Lord of the Rings: Rings of Power' fanfiction or an adaption? The evidence seems clear that the creators intended it to be an adaptation. The Vulture says "Appendix B offers a slim timeline of the major events of the era, which leaves room for televisual reinterpretation; the series also compresses events for ease of adaptation. ... Their development process was a bit like studying a religious text: They welded together a narrative from heavy close reading, deduction, and in cases where the text is silent, careful, Tolkien-scholar-supported flights of fancy." ('Close-Reading Lord of the Rings with the Creatives Behind The Rings of Power', The Vulture) Therefore our first evaluative question is how successfully has the secondary world  Tolkien created, been translated into Television by the Amazonian artists McKay and Payne?

Email ThisBlogThis!Share to TwitterShare to FacebookShare to Pinterest
Labels: Lord of the Rings: Rings of Power, Tolkein

Roe Vs Wade, Karen Swallow Prior, Trump and Israel Folau

The end of Roe vs Wade is a wonderful thing and a culturally and theologically significant moment. Christians have always opposed abortion (Abortion and the Early Church) and there is a good philosophical case against abortion (The Unaborted Socrates). Abortion is also a transcultural and global issue. For example, back in 2004 I clipped this article from the Australian newspaper about a Dutch ship providing abortion services to Polish people, then in 2016 I noted how the French Government banned a pro-life video featuring down-Syndrome kids and then most recently it was interesting to read the Prime Minister of New Zealand Jacinda Ardern, condemning the decision to overturn Roe vs Wade.

Abortion is a sensitive topic to research and write about. Each Australian state has its own laws about abortion and most allow abortion and restrict protests around abortion clinics. You can get a rough idea of how many abortions take place in Australia by looking at the Medicare item number 35643 here. I want to make a few comments about how Christians have and should respond and then some practical suggestions for Christians in Australia in the light of Roe vs Wade being overturned.

Sadly, sometimes Christians have been tricked by the myth of over-population, thinking that reducing population, instead of improving technology and living less exorbitant lifestyles, will help our natural environment. I don't have a link for it, but I've heard some Christians in Australia argue that the embyro has increasing moral value, therefore making the abortion of a zygoyte less morally wrong than partial-birth abortion. Initially, this argument appears cogent, a zygote lacks recognisable human features. However the implied measure of human fullness is never described, making that argument useful for eugenics, slavery and various forms of euthanasia. This is where Israel Folau comes in. Israel Folau, a Rugby player was kicked out of Rugby for posting a verse about sexual sins on his social media.This became a larger debate about religious freedom.

The Australian Christian Lobby embraced the cause despite Israel Folau not technically being a Christian - belonging to a group that denied the Trinity, but the Trinity is the historical and theological boundary of Christianity. The Annunciation (Luke 1:26-38), marks the moment Jesus is conceived in Mary. The key verse, verse 35 says: “The angel answered, 'The Holy Spirit will come on you, and the power of the Most High will overshadow you. So the holy one to be born will be called the Son of God.'" This verse is both Trinitarian and pro-life. The Son of God begins his 'humilation' as a human zygote. Interestingly, both progressive and conservative Christians are in danger of forgetting the Annunciation.

Christians can make a philosphical and Biblical argument for being pro-life. Things exist and have boundaries, in the case of people, they have beginnings and ends. Conception is the beginning of a human. Ideal forms, or essences, exist for everything including humans. A zygote, contains the ideal form or essence of a human. We see this in Luke 1:35, the moment of conception marks the moment the Son of God takes on human nature. Deformities, changes in circumstances or capacity doesn't negate this essence, they just highlight the need for us to be protective, careful and kind. In a Darwinian-world they would be cast aside in favour of humans able to reproduce. Another interesting theological implication of being Pro-life.

Christians on the other side of the debate are also tricked by unhelpful arguments. I once heard a sermon in Hobart that condemed any lady in the congregation who'd had an abortion as a murderer, it was as horrible as you can imagine. Christianity is about grace, there is a path back to Jesus for everyone, no sin except rejecting Jesus' forgiveness is beyond the pale. This is the scandal of Christianity, grace for everyone who accepts it. Christians find it hard to be Christians, hypocrisy is the root of Christian sin.

This is where Trump and Karen Swallow Prior come in. Politically Trump took the second-last step of overturning Roe vs Wade by appointing pro-life judges, particularly Amy Coney Barrett to replace Ruth Bader Ginsburg. Some conservative Christians want to make the overturning of Roe vs Wade into a political event. Which is where Karen Swallow Prior comes in. She is a prominent American Evangelical academic who is both strongly Pro-Life (arrested for protesting at abortion clinics) and strongly opposed to Trump. The end of Roe vs Wade is a good thing, that Trump helped create, but you don't need to support Trump or other conservative shibboleths to be Pro-life.