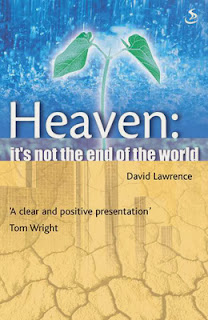 'Heaven: It's Not The End Of The World' by David Lawrence


"Seeing God's ultimate plan for us as being 'heavenly' and 'spiritual' has led us to imagine that spiritual things are God's chief concern. If a spiritual heaven is God's greatest good for us, then the earth and our physical existence on it must be somehow 'second best'. Consequently, many Christians hold the view that the only reason God created the earth was to give people somewhere to live whilst they decide whether or not to follow Jesus!" (15)

Old Testament Survey
Lawrence makes the case for continuity between this world and the next, between creation as we know it and the new creation after Judgement day. This paradigm is first expressed in God cleansing the earth with Noah's flood, here there is a judgement and a recreation but not an extinguishing of what was. Lawerence then traces the significance of this world through biblical history. From the scope of the Abrahamic blessing to the practical expression of God's character in the Old Testament laws. The importance of land is another demonstration of God's involvement with his creation. Lawrence ends his brief Old Testament survey by noting that the ultimate restoration outlined by the prophets is often described in physical terms.

New Testament Survey
Jesus didn't describe the end of space and time but a radical judgement and restoration, in the age to come. He ascends with a promise to return to this world in glory. Jesus promises renewal not discontinuity (Matt 19:28)  “I am making everything new!” says Jesus on the other-side of eternity (Rev 21:5) Interestingly the wicked are removed, sent away (Matt 25:46), but the faithful remain, here on this earth.  Moving to the Apostle Paul, Lawrence describes the frustrating incompleteness of 'the now but not yet-ness' of this present age (1 Cor 13:12). Then there is this great quote from Berkouwer: "If the future is an unknown 'reality', why do the Old and the New Testaments not talk about an unknown 'x' - an unknown quantity - instead of arousing these various concepts of what the new heaven and the new earth will be like and talking about the longing of creation for freedom from its perishability?" Tangentially Lawrence rightly observes that the fire of judgement in 2 Peter, should be understand in the same way Noah's flood functioned. Finally he closes the Biblical survey by showing a metaphorical return to Eden in Revelation where God dwells with us (Rev 21:1-5).

Heaven
In the next chapter Lawrence explains that heaven is not a separate post-world destination but a current invisible reality, "an unseen portion of the cosmos."Heaven is the dimension in which God exists (Eccl 5:2). There are a variety of views about where the dead reside but Lawrence suggests the faithful are spiritually with God until the final judgement and restoration of all things. The invisible supernatural forces of heaven interact with this world. Heaven like the world, will be remade (Rev 21:1).

Sheol and Hades?
We might be tempted, as we listen to Jesus' prayer on the cross (Lk 23:46) to think that our spirit is the only thing of significance that lasts. But Jesus returns from Sheol, the realm of the dead, in a resurrected body. Lawrence then helpfully explains that Hades is probably better understood as a resting place for the dead, until the final judgement.

The Resurrection
The cross, without an empty tomb is no gospel at all (1 Cor 15:17-20). Lawrence observes how much of Peter's Pentecost speech is focused on the resurrection (Acts 2:24-32). Quoting John Stott: "The resurrection of Jesus provides solid, visible, tangible, public evidence of God's purpose to give us new bodies in a new world." Lawrence points out that Jesus showed the disciples that it was really him, alive and well. Not simply a resuscitated corpse but a physical body recreated with an eternal life-span. A body "the same yet not the same; this body, but adapted to the new conditions of heavenly existence." (88) The Pauline spiritual gifts and blessings are to be understood in contrast with fallen things and not a final description of our nature. "To follow this train of thought, the resurrection body is 'spiritual' not in the sense of 'immaterial' but of 'supernatural.'" (91).

What might the New Heavens and the New Earth be like?
"The future of the believer is inextricably bound up with the renewal of all things. God has promised a new earth as the inheritance of his people and what God has promised will come to pass. With G C Berkouwer, we affirm then that 'it is precisely ordinary earthly existence that is redeemed'." (99) We're given more than a vague optimism about the future. Just as Jesus was recognisable to the disciples after death, our memories and identity will not be erased. Our relationships won't cease to exist, we'll remember who people are on the other side of eternity. "Isaiah foresees the day when God's people will 'build houses and dwell in them; they will plant vineyards and eat their fruit.' (Isaiah 65:21)" (116)


"Surely it is a very narrow view of God's involvement in his world which he maintains that all he is interested in is the salvation of our souls. We have seen that God is the God all creation. We noted at the outset that the earth was not just a disposable space-station on which God could work his salvation mission, but it was - and still is - his creation and at every step of its development he has been sustaining it. I am sure that many great works of art, architecture and music, along with scientific discoveries and technological advances have delighted God.  ... But it is unthinkable that God should judge all the progress made (by his enabling) though human endeavour worthless - as deserving to be burnt with judgemental fire." (124)

Contemporary Relevance
Ever present dangers include losing sight of the Creator, by focusing too much on the creation. Another is making God impotent or distant, disconnected from our current pain and pleasures. The suffering of the world it not just answered in the age to come but in this world, in this age. "Miracles do happen. God does answer prayer. Sick people are healed. God provides enough evidence of what life will be life there to keep me going when faith is at a low ebb." (147) As people of the New Covenant, we no longer have to worry about the distinctions between the 'spiritual' and the 'physical.' "All of life has eternal significance." (151) We should see our redemptive activity as the "recovering of creational goodness through the annulment of sin." (157) Christianity is a lived-out theodicy, working against sin and it's expression across all the cosmos.
Email ThisBlogThis!Share to TwitterShare to FacebookShare to Pinterest
Labels: Christ & Culture, Eschatology, Worship
Newer Post Older Post Home