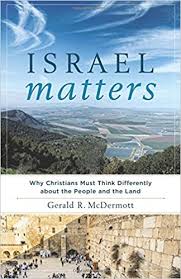 Gerald McDermott in Israel Matters: Why Christians Must Think Differently about the People and the Land, (2017) presents a cogent theological argument for the continued importance of a Jewish nation living in the land of Israel. This is controversial because the dominant Christian paradigm has been Supersessionism, the idea that “[t]he church has replaced the Jews as the inheritors of all the biblical promises concerning Israel. … The Jews are no longer God’s people in any special way, and the land of Israel is like the land of any other country in the world.” (page 2) McDermott traces out the history of that paradigm. For example, Irenaus saw Israel as only a temporary phenomena and Origin spiritualized Israel. This pattern was formalised in Augustine’s amillennial theology. The miscalculation of Supersession is highlighted by Schleiermacher who claims the New Testament has more importance and potency than the Old Testament.

However, McDermott traces out a contrary paradigm, that sees a continued place for the Jewish people and Israel in God’s big story. For example, Tertullian sees a place for the Jewish people and their land in God’s plans. Significantly, study notes in the Geneva Bible (first published in 1557) highlighted the importance of the Jewish people in God’s future plans, a theme picked up by some of the Puritans. Then Jonathan Edwards continued the growth of this contrary paradigm, noting that Scripture predicted a return of the Jewish people to their land. An idea that influenced Lord Shaftesbury an early Evangelical Zionist who in turn was part of the movement behind the Balfour Declaration, a document that declared British support for a Jewish state.

That the Jewish people and the modern state of Israel have a place in God’s big story is not simply a paradigm in Church History. In the New Testament ‘Israel’ is never used as a metaphor or type for the Church. McDermott argues that the Apostle Paul’s mission to the Gentiles is about adding to the “commonwealth of Israel” (page 5), not the creation of a new people. The Apostle’s mission reflects a deeper pattern across Scripture. God uses the particular (a particular person or people) to bring blessing to the universal (the world).” (page 46) Notably, observes McDermott, the land is included in the original promises, not as an after-thought or adjunct blessing.

McDermott then tackles the tricky topic of Law, focusing on the book of Galatians. The implication of Supersessionism is that God no longer has a concern for a specific people or a specific place. Additionally the Law of 1st century Judaism is often misrepresented as uniformly based on works-righteousness and devoid of a personal relationship with God. However, the gospels present Jesus operating within the Law. For example, Jesus says he didn’t come to abolish the law (Matt 5:17) and commanded his disciples to obey the Pharisees (Matt 23:3).  When he comes to Galatians McDermott overplays the idea that Galatians is addressed to a Gentile congregation. What is more likely is Brian Rosner’s thesis that the phrase ‘the Law’ has multiple referents and connotations. As he discusses the Law both in Galatians and Romans McDermott misses the way in which the Law is about regulating our access to God.

Recognising the ongoing theological significance of the Jewish people has modern political consequences. McDermott, however, is rightly cautious in his approach and encourages the reader to read widely and think carefully before they apply their theology to politics. He briefly notes the salient facts about the creation of the modern Jewish state, from the San Remo treaty of 1920, the partition of the British mandate into a Jewish and Arab homeland and then the controversial United Nations resolution 242. While Palestinian independence has become a cause célèbre for some, Christian Zionists says McDermott, should like the Jewish citizens themselves, be ready to criticise the modern state of Israel.

Finally, McDermott outlines several practical application of this paradigm. Firstly is his suggestion that the prophet Jeremiah’s famous promise of a new covenant (Jer 31:31-34) does not destroy the old covenant, but is a “deepening” (page 96) of the first. This is certainly true but probably a more useful way of viewing the two covenants is to see a changed pattern access to God. However, McDermott’s thesis helps us understand the continuity and discontinuity of the Old and New covenants more clearly. He also notes that the biblical genre of Prophecy has ongoing significance. Another application of McDermott’s argument is to view Israel’s relationship with God an ongoing parable of God’s faithfulness despite human sinfulness. Lastly, this paradigm reminds us of the importance of the Incarnation, the Son of God has taken on a Jewish identity, which is part of the ongoing ‘scandal of particularity’ at the heart of our faith.