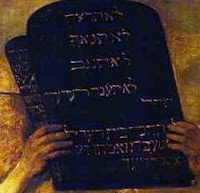 The Pentateuch, is dominated by the beginning of the world, the story of the Israel and the Law given through Moses. Tracing out the Law's relationship to Christians today and its place in the New Testament is important for our own obedience to God and for understanding Romans.

This blog post isn't exhaustive but I've tried to pick the key or summative passages about the Law.


What’s the purpose of the Law?


Traditionally Reformed theology (except Lutheranism) has divided the Mosaic law into three categories: "ceremonial, judicial and moral" with moral law being the most significant.  These categories are broadly useful but their strict application could imply that some laws are no longer relevant to the modern Christian. Doug Moo in The Law and Gospel helpfully suggests God's eternal law sits behind the Mosaic Law. This also makes sense of the emphasis on the moral aspect of the Mosaic Law.

Scripture distinguishes between "God's Law" and the commandments given to Moses. (1 Cor 9:21) The summary of the Law provided by Jesus (Matt 22:40) and echoed by the Apostle Paul (Rom 13:8-10) indicate that there is an eternal essence of the Law that is more than its expression at Mount Sinai (Hosea 6:6 & Gal 6:2). It also seems that God's Law, his eternal decrees, are known to the Gentiles. (Rom 1:32) So it would be safe to say that God's eternal or moral law sits behind, the law written on our hearts (and first expressed to Adam in the Garden of Eden), given to Moses or the commands given in the New Testament. 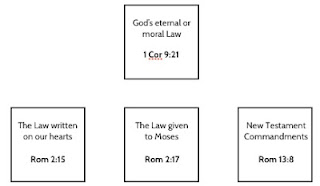 How were people saved in the Old Testament?

What guides our application of the Law today?

Pulling all these thread together means that although we no longer have to offer animal sacrifices or wear non-mixed clothing, the principles of God's holiness and our sinfulness remain. The Law has been fulfilled in Christ, we have freedom to take our day of rest on Tuesday, but we're still called to obey God and God's eternal Law sits behind every command in Scripture.