The Subordination Dust-Up: my two cents 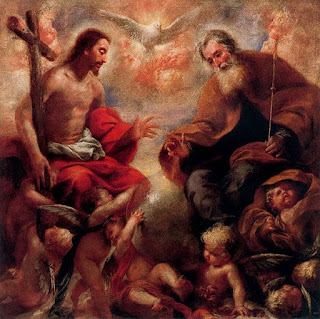 The Subordination dust-up, or "civil war" as Mike Bird gleefully calls it, is chronicled here, summarised here by Andrew Wilson and explained over here by Christianity Today.

One of the benefits of Feminism apart from helping women, is that it forced Complementarians not to be lazy. Rather than relying on chauvinism to enforce male-only-ordination, we had to have actual theological reasons. The modern movement of Complementarianism was born in the second half of the twentieth century, to explain why the Apostle Paul might instruct only men to have authority within the church or tell them to take responsibility as husbands. If this principle of male leadership is trans-cultural, applicable across time and space then it needs a profound basis, a really good foundation. So the idea of different roles but equal value was traced back to the fact that within God three persons exist but only one being.

But because God is holy and true we want to get this tracing-back-of-our-ideas-to-God really accurate and clear. So we take seriously the accusation that "it sounds like we're making Jesus subordinate to the Father". (Arianism alert.) That since there is only one divine will (The Son takes on a second human-will when he is conceived as Jesus in Mary's womb), how can the Son be described as obedient or even having a different role prior to the Incarnation? Two concepts are often used; the 'eternal generation' of the Son or the 'pactum salutis' a covenant between the Son and the Father, to demonstrate the origin of Jesus' earthly obedience. The jury is still out on whether one or both of them can carry the weight of affirming unity while distinguishing usefully between Father and Son.

It's worth wrestling with these dangers because the dangers in the opposite direction are just as worrisome. If the persons become indistinguishable then we run the risk of 'Modalism' - one god wearing three masks. The other danger is saying that Jesus' obedience was "temporary", that Jesus' gender, race and family "tell us nothing about who God is", that God remains forever unknowable, which is essentially Docetism - a form of Gnosticism. So as you read through the debate keep these three principles in mind:

That means that there is unity (divinity/all the attributes of God) and diversity (three persons) ad intra - within the internal operations of God. (I'm still figuring which concept best expresses the three persons without veering into Tritheism. "Substances" sounds clinical but has enough ambiguity while maintaining some sense of distinction without becoming individualistic. I'm looking to Andrew Moody over at TGC-Aus to solve this one.) But loosely paraphrasing Bavnick, the Trinity is a word that means "who God is and how God saves." God reveals himself to us in through history, Scripture and Jesus. God is unfathomable but not unknowable, God's a God of communication. (Which is how I personally interpret Rahner's Rule.) Lastly if God is both Creator and King, then our faith and life has it's origin and maintenance in the Trinity. Our world is wonderful and coherent because the Trinity is wonderful and coherent first.

Furthermore, a helpful way to keep a Trinitarian balance as you read the gospels is to be reminded of how God in Jesus experiences all the aspects of our humanity. We treat Jesus and the Son as a single person with two natures, the divine being and a Jewish body. Sometimes it might be useful to zoom in and discuss how Jesus expresses his supernatural power or experiences ignorance but always keep in the mind the larger framework of God in Jesus experiencing all the aspects of our humanity. After all, that God is revealed in Jesus is the secret of the Universe.

A revised and extended version of this article is published over at Thinking of God.