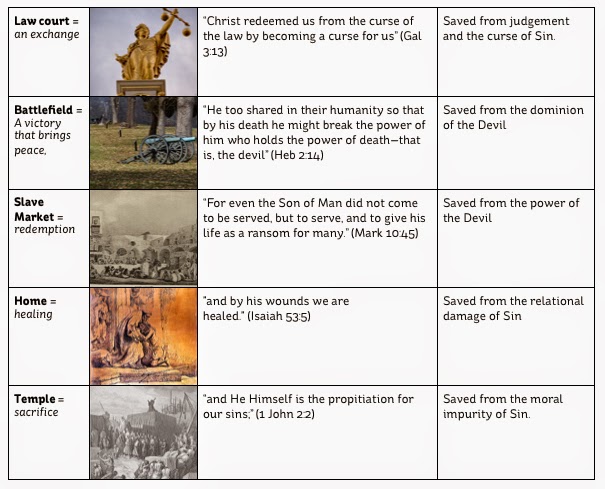 Five complementary and sometimes overlapping metaphors are used in Scripture to describe different aspects of the work of Christ. This is a more helpful schema than viewing the atonement as a battleground of rival theories. The Ransom theory (popular since the early church) highlights the Slave-market and Battlefield metaphors. Anselm's Satisfaction theory reminds us of the Law-court and Temple metaphors. The more modern phraseology of "penal substitution", like the Satisfaction theory, encapsulates the force of the Law Court and Temple metaphors. Even the unpopular Moral-influence theory highlights the power of the Temple metaphor. (In some ways the temple sacrifices are a precursor to theatre, a living parable where the scapegoat suffers instead of the watching audience.)
Email ThisBlogThis!Share to TwitterShare to FacebookShare to Pinterest
Labels: Atonement, Jesus
Newer Post Older Post Home