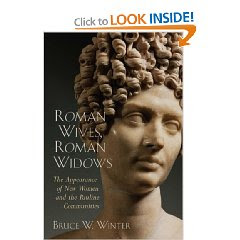 Roman Wives, Roman Widows: The Appearance of New Women and the Pauline Communities
by Bruce Winter.

Apparently, according to Winter, the Roman Emperor Augustus legislated against a new wave of women who were sometimes promiscuous, dressed provocatively and were generally opinionated. The book is divided into two parts, in the first half Winter outlines the evidence for this "new" type of women who were apparently plaguing Roman society. In the second half, by far the more provocative, Winter suggests we need to interpret various passages about women in the New Testament based on this "new Roman woman" (NRW) theory. Winter is in several
circles, highly regarded. However I was disturbed that as a theological student, with an amateur interest in both history and theology, to find several problems in Winter's historical methodology and in his theological conclusions.

Winter has obviously done a lot of research and writes in easy to digest manner, I don't mean to dispute the idea that these type of Roman women existed or to suggest that Winter is a dodgy historian. However focusing just on some of his evidence and argument from pages 112 to 122, problems with his historical methodology and theological conclusions emerge. Within these ten pages Winter applies elements of his NRW theory to 1 Timothy 2:11-12. (While my comments are superficial they highlight the main areas of concern in the section I've chosen as my sample.)

The two main problems in Winter's historical methodology are the nature and use of evidence. Winter relies heavily on various secondary sources who I presume are reliable and uncontested. This is due to the relative lack of primary sources available. Within pages 112 to 122 Winter quotes several times from the Middle Eastern Lucian and the Roman Juvenal. His thesis, the NRW theory has it's starting point with Augustus' legal decrees. However given the size of the empire and it's eclectic nature we have no way of evaluating how extensive the issue was that Augustus was legislating against or if it was as problematic in Ephesus as it was in Rome. If you accept an earlier date for 1 Timothy (for which Paul Barnett makes a convincing case) then the satirist Lucian 125-180 who is writing possibly decades after the Paul addresses Timothy's situation in Ephesus doesn't make for a super relevant source of evidence. Furthermore Juvenal another satirist who writes possibly within the time of Paul writing to Timothy is not a historian like his contemporary Tacitus. Now it is likely we can draw reasonable inferences from these sources but Winter wants to suggest based on only a relatively small survey of primary sources we are able to reconstruct a fairly detailed context for Paul's letter to Timothy in the NRW theory. However, evidence needs to be reliable, relevant and representative. Reliable in portraying Ephesus, not Rome, relevant to the case being proved and representative of both the available evidence and the actual history that occurred in that time and place.

Theologically then there are problems. While it is quite possible the evidence does in deed point to a NRW theory it is a massive jump given the restrictions I've outlined above to then say he has discovered a watertight context to interpret 1 Timothy 2:11-12 within. The further one goes back in history the more generalised one's assumptions have to be given the scarcity of evidence, the gap in time and the sheer amount of undiscovered material. It is a massive and to my mind unwarranted step to take what could be a legitimate theory and decide it has interpretive power over Scripture. Theologically this has pastoral implications. How are ordinary people like myself able to shift through and evaluate Winter's evidence? But it's time to let Winter speak for himself in his summing up from page 121 and 122;

"McGinn put the matter succinctly; 'Clothing's role as a status maker
receives repeated recognition from the jurists' and as a yardstick for
morality among woman. In Roman law there was no culpability if a
woman sent the wrong signals by the way she dressed, for 'matrons had
more protection in law only if they looked respectable.' The focus of
1 Timothy 2:9-15 was not with the limited culpability of someone who
made sexual advances towards a woman whose intentions were misread
because of what she wore. Rather the Christian matron's modesty was
set against the antithetical behaviour of the promiscuous wife in the
public place. (See ch. 5) The public perception of Christian wives
was a critical matter in the community; they would play into the hands
of the enemy of the early Christian movement in Ephesus if they
dressed like high-class prostitutes. ... They [the enemies of the
Christians] could have concluded that they [the Christians] belonged
to a promiscuous cult that endorsed avant-garde behaviour."

I don't mind if someone says, "Hey Winter makes a good case for the behaviour of Roman women and it sure sounds like what Paul is speaking against." That's fine but it's a theory that could change some what, the next historian may discover those type of women were the exception and not the norm. We may even use Winter's theory to clear ourselves of modern biases that we bring to the text but we cannot as Winter suggests above reduce Paul's commands to local advice because some extra-biblical evidence makes the situation in Ephesus look a certain way. This is Winter's theological problem. Scripture is sufficient for faith and godly living. (2 Tim 3:15,17 and the Westminster Confession) The Sufficiency of Scripture requires no attentional extra-biblical information for it's interpretation. We may use extra-biblical information to translate units of words but words and sentences are the not the final form of language, texts are and the texts of Scripture are theologically sufficient.