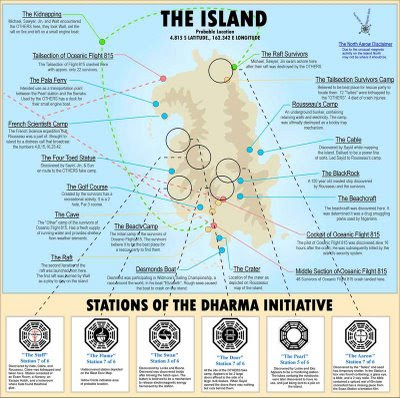 I've just finished writing the guts of a sermon in which I use an illustration (or two or three) from LOST. I think the primary strength of this show is the narrative, which is strong with lots of underlying allusions to science fiction, religion and philosophy. It's also fairly clean, no s-x or bad language but lots of lashings of violence. Amy also pointed out the main characters are dominated by alpha males albeit each with their own issues but it's compelling to watch strong characters exercising leadership in the face of adversity. (It's also 'post-apocalyptic' in the sense that it's a story about the survivors of a disaster.) Anyway above is a map of the island the survivors of flight Oceanic 815 are trapped on.
Email ThisBlogThis!Share to TwitterShare to FacebookShare to Pinterest
Labels: LOST, Maps
Newer Post Older Post Home