Imputation, does it really exist?

Background - Wright and Piper and the 'New Perspective on Paul'

There are two sides to the concept of "imputation," to put it crassly: the nasty and the nice. My MDiv project is focused in part on the nasty side, how everyone is sinful because Adam's sin is imputed to them. The nice side is that Jesus' righteousness is imputed to everyone who has faith. However the imputation of Jesus' righteousness to us has been all tied up in the debate about the 'New Perspective on Paul,' invented by Sanders and championed by NT Wright and Dunn among others. A generous summary of the debate is that Wright focuses on the macro picture of justification as part of God's larger plan through time and history. ( Just as circumcision, Sabbath keeping and food laws were the boundary markers of the old covenant so faith is the new covenant boundary marker.) On the other hand John Piper focuses on the micro picture of justification. (How the righteousness of Jesus is imputed to us individually.)

My sympathies are with Piper because while I acknowledge that Wright is correct in saying God justifies a bride, His whole church, justification has an individual focus demonstrated by Saul's autobiographical journey from seeking to merit as a way to God, to Paul's realisation that it is Jesus' death for his sins that makes him justified before God. Furthermore I'm concerned Wright relies too heavily on extra-biblical sources to prove that "law" in the New Testament means purely boundary markers. Furthermore the "law" is obviously used by the Apostle Paul in a much wider and more complex fashion then Wright alleges.

Piper in The Future of Justification: A Response to N. T. Wright carefully and graciously addresses the way in which Wright neglects the doctrine of justification. It is a little disjointed as Piper moves from critique to critique however I think this more of a reflection of how hard it is to pin Wright down despite his generally florid prose. For a short and sharp account of the imputation of Christ's righteousness to us, look no further then Piper's Counted Righteous in Christ. 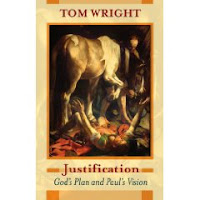 Justification: God's Plan and Paul's Vision is one Wright's most recent books and as is being carefully blogged through by Douglas Wilson (The Presbyterian minster who recently defeated Christoper Hitchens in a debate.) over at Blog and Mablog. It has only recently arrived at Ridley Bookshop so I'm looking forward to reading it with Wilson's blog posts along side as a commentary.


The blog debate about Imputation:

A little while ago Michael Jensen on his blog was wondering if imputation is a concept explicitly attested to in the New Testament. He quoted this fellow as saying:

Well, the fact of the matter is that we cannot proof-text imputation. If we think we can cite 2 Cor 5:21, Rom 4:1-5, 1 Cor 1:30, Phil 3:6-9 and find the entire package of the imputation of Christ's active obedience and the imputation of our sin to Christ embedded in all of these texts, we are sadly mistaken...

Something in this picture makes me uncomfortable and it wasn't until I read Douglas Wilson that I could identify the full extent of the problem in down playing imputation. Wilson writes this about imputation:

Without imputation, Adam, and Jesus, and Abraham, and Douglas Wilson, and [put your name here] are all isolated and separate individuals, with distinct lives (all but one being wretched and miserable), and that have nothing to do with one another. Adam disobeyed, and what is that to me exactly? Abraham believed, and so what? Jesus died and rose, and how is that mine again? Wright wants us to tell the grand story, leaving imputation behind. But the reason Wright doesn't see imputation is that he thinks in order to exist, it needs to be a character in the novel he is reading. But it is not so much a distinct character, as it is the paper the whole thing is printed on.

[Update 9/3/09: Just to clarify, Michael comments that he was challenging the idea that imputation is explicitly taught in Scripture, not the idea of imputation.]