Can you map cool? 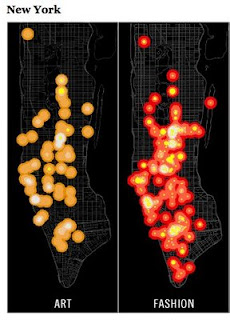 Mike and Mikey have both recently posted on Christianity and "coolness." There is the perception that Christians are daggy. Given that fashion is a cultural phenomenon related to civilisation and cities, it's no surprise that a person's philosophy will to some extent inform the clothes they were, the events they attend and the things they read and write about. What is fashionable, is an independently fascinating phenomenon to observe with most in the West not being entirely separate from.

I believe history is a linear progression made up of recurring cycles. Western civilisation, based largely on liberal democratic principles and a market economy is in the ascendancy. (Global recession not withstanding.) Given the growing post-Constantine divergence between Christianity and Western cultural norms I think Christians are for most of my life-time at least going to be on the "daggy" end of culture. I say this as someone who tries to let my philosophy determine my fashion (clothes, events etc) but often economic utility or differing personal priorities prohibit that.

All this to say, that this article about mapping cool in New York and Los Angles is interesting. (I wonder if there is any correlation with local church locations?) Shiloh is allowed to skip the article and just look at the map! Also worth checking out on this topic if you haven't already is this woman's critical but humorous look at American Christianity.
Email ThisBlogThis!Share to TwitterShare to FacebookShare to Pinterest
Labels: Maps, popular Culture
Newer Post Older Post Home