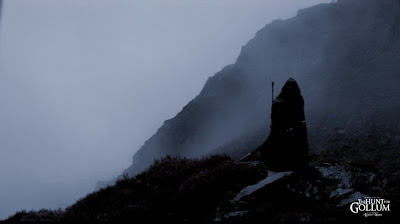 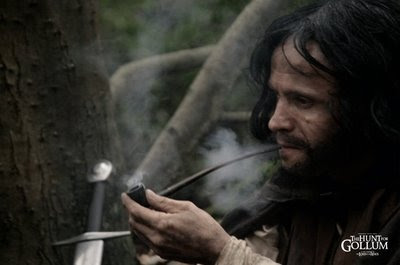 Time for some worldview action. Everyone has a worldview, who shapes your worldview, your way of understanding and explaining the world? Mine was and is shaped in part by Tolkein. Having being eventually upset by Jackson's version I thought I'd been all turned off a movie adaption ever again. But then seeing the stills for this fan film all the excitement and anticipation came flooding back.

[Images from 'Stills' at The Hunt for Gullum]
[ht Craig]


[Update: after watching the The Hunt for Gollum.]

Wow, first impressions: For a fan film I'm very impressed, in fact it's a little embarrassing for Jackson that a low budget fan film based on the same material could be so good. Of course there some problems; very quiet sound, a few wooden lines, occasionally some cheap orc makeup and the fan-film Arwen isn't as pretty as the Jackson Arwen. But my word, the respect for Tolkein's world is soaked into every scene, little things like using the original maps, being faithful to the wider storyline and creating the right tone through their use of landscape, costume, music and plot. (Although the ambiance is very much like the movie series.) The beauty of fan films is their loyal allegiance to the secondary world. The actor playing Strider is alot younger then the movie version but plays the role well; one of my favorite bits is his ambush of some ocrs tracking Gollum. After capturing Gollum, Strider keeps him in sack, which while saving on CGI, keeps the imagination active but also makes for some funny lines such as "Your staying in the sack then!" A final quibble, from one fan to another, Strider wouldn't grab his sword by the blade unless he was wearing very tough gloves.