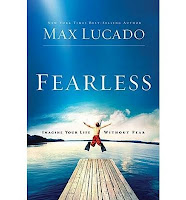 I have a policy of never saying no to a free lunch, this policy has served me well, so I've extended it to free books. Thanks Thomas Nelson for this free copy of Fearless to review.

Lucado writes like an affable but absentminded uncle. He's affable because he has good presuppositions: God wins, the Son of God suffered the wrath of the Father and Jesus really did rise from the dead but he's absentminded because there isn't any meat to his writing, there isn't any depth, it's all anecdotes and advice. In each of the chapters of Fearless Lucado explains how to respond to different types of fear. For example the fear of challenges, the fear of being a parent or the fear of doubting God. While the book itself would be a good source of illustrations for a preacher or public speaker Lucado fails to connect the theology with the practice and in the process becomes muddled about the definition of fear itself. At one point he quotes from the Life of Pi “I must say a word about fear. It is life's only true opponent. Only fear can defeat life,” but then later says there can be “a holy, healthy fear” of God. (168) While it's great Lucado examines what makes us afraid, he creates confusion by elevating fear into something bad in and of itself, when really fear is a neutral emotion, it's the thing feared that is either good or bad. Overall Lucado misses an opportunity to remind people about how broadly and deeply the doctrine of grace can be applied to their lives.
Email ThisBlogThis!Share to TwitterShare to FacebookShare to Pinterest
Labels: Book Reviews
Newer Post Older Post Home