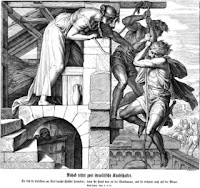 Also known as the Euthyphro problem. The story goes that Euthyphro was asking Plato about the definition of holiness and finally described it as an action of the gods, but Plato asked what if the gods did something 'unholy'? With Rahab, her lies saved the Jewish spies (Joshua 2:1-14), an action considered virtuous (James 2:25). How do we resolve this apparent contradiction? How do we take the 'Rahab problem' into account when we build our moral basis for Christian Ethics?