'Why I Became an Atheist: A Former Preacher Rejects Christianity' by John Loftus 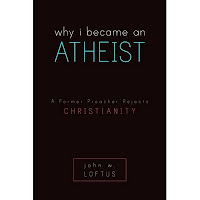