A Reflection on Ridley 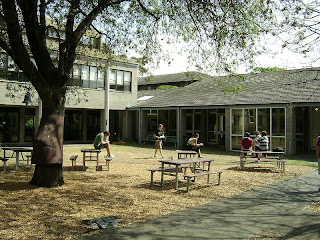 Now that I've finished studying I thought it would be good to reflect on my time at Ridley College.

Amy and I chose Ridley because we thought we might end up overseas with CMS, the main Anglican missionary organisation, teaching at a Bible College.  This grew out of an earlier desire of mine to pursue some sort of post graduate studies in History.  However this evolved into a plan to pursue full time paid ministry here in Australia.  I then settled on going to Ridley, which also meant cementing the Anglican path.  I admit I was influenced in my choice by observing Anglicans such as Kaniska Raffel and Mike Raiter in action. I also didn't feel bad about crossing over from the Presbyterians to the Anglicans after seeing how Paul Chew also crossed over and had carved out a niche for himself in the Anglican Church of Tasmania.  (Although admittedly I 'd grown up for twenty years at Margate Brethren Church before meeting and marrying Amy.)

The Ridley experience was a good one.  While learning Greek and Hebrew was hard, the immersion in Scripture, theology and ministry was exciting. I'm glad it only took three years, four years would have disconnected us to much from Tassie, and the occasional drudgery of study would have become overwhelming.  I sometimes also struggled with the tension between academic achievement and theological success.

Ridley, while I was there, underwent a lot of changes, hiring new staff, selling part of their property and expanding their academic options.  I enjoyed interacting with a wide range of view points, and ironically feel I've ended up more conservative in my theology then if I'd attended, say Moore College.  ( For example Peter Adam convinced me on the inerrancy of Scripture, Doug McComiskey explained the failings of the New Perspective on Paul and Rhys Bezzant directed me to the erudite Jonathan Edwards.) One of my only disappointments is not doing a formal course of apologetics, a subject Ridley is going to introduce next year.  However my informal reading lead me to Van Til which was very exciting, so it was cloud with a silver lining.
Email ThisBlogThis!Share to TwitterShare to FacebookShare to Pinterest
Labels: Remarks
Newer Post Older Post Home