Is there a population problem? 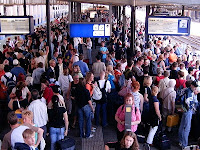 I used to think population growth was a problem, you know those graphs showing the every increasing trajectory of total global population.  I didn't like seeing the urban sprawl chewing up the fields and hills I'd grown up with and I imagined the teeming insanity of city like Jakarta. But now I'm not so sure, people are good because God made them and furthermore He wants them to become Christians. Actually an increasing population is not the problem, it's peoples sinfulness expressed in greed, murder, pride and lies that's the problem.

Somewhat co-incidentally, John Langmore a Melbourne based academic from the Public Affairs Commission of the General Synod of the Anglican Church of Australia, released this discussion paper.  It's sobering reading, in the sense that the church, I belong to, is seeking to make the case that overpopulation is bad.  The case against over-population is incorrectly couched in the 'caring for the environment' argument; but they are not mutually exclusive concepts.  I think it's a case of trying to jump on the populist bandwagon and landing in the theological mud.  I take a little of bit comfort in the fact that the Australian general Synod is a fairly toothless, unrepresentative organ.

Anyway the discussion paper has caused a global stir.  First Things picked up the story after the SMH and The Age's rather clumsy reporting.  (The Sydney Anglicans have it in their news feed but have made no comment.)
Email ThisBlogThis!Share to TwitterShare to FacebookShare to Pinterest
Labels: Ethics, Evangelism
Newer Post Older Post Home