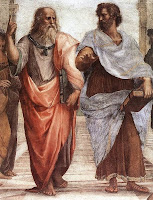 I'm generally in favour of arguments/debates and discussions.  In fact there is sometimes even a positive side to conflict.  For example in one of conflict's most extreme forms, war, both the best and the worst is brought out in people.  (War, however is best studied and not experienced.)


I want to suggest, somewhat controversially, from anecdotal experience, that arguments, however are sometimes a good way to win people over to your point of view!  These are four ways people change their mind based on arguments/debates and discussions:  (This post isn't a comment on the way people conduct themselves during a debate/argument.)
1. From the sidelines
This is how many people change their mind, they observe the clash of two perspectives, two ideas and then make up their minds.  For example they may have held one view only lightly but then seeing it defended, decided it was the best view.
2. From a trusted source
If people feel safe with their opponent, they'll be inclined to change their view.  For example x and z are dear friends and x has a strong opinion about something, z debates with x very forcefully until they've covered all the aspects so z changes their mind.
3. From a distance with perspective and time
The heat of the debate and the aftermath are two very different spheres. People may change their mind much later on the basis of a debate which looked at the time like a total deadlock.
4. Very occasionally from the person they are arguing with
Sometimes a straight up argument produces an immediate change of heart.  Just because a debate doesn't change a person's mind in this way doesn't mean arguments don't change people's minds.
Email ThisBlogThis!Share to TwitterShare to FacebookShare to Pinterest
Labels: Thinking
Newer Post Older Post Home