The myth of over-population 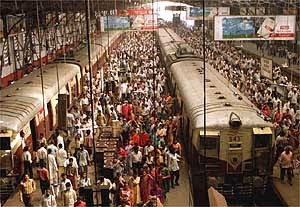 Back in May I commented on over-population and referred to this paper, released by the 'Public Affairs Commission' a subcommittee of the General Synod of the Anglican Church of Australia.  Its release was picked up by the AGE newspaper here in Australia and then by the First Things blog and now most recently by the American magazine, Christianity Today.  Unfortunately at each stage, it's been assumed the findings of this subcommittee are somehow officially or unofficially representative of the opinion of the Anglican Church of Australia.  I for one, an Anglican Priest in the Diocese of Tasmania, am strongly opposed to the paper.  Somewhat tangentially this paper reveals that the theological battle for the 'soul' of Anglican Church of Australia, is far from over and also highlights the need to for Evangelical involvement in these sorts of high level sub-committees.

Christians need to be wary of the 'over-population' myth, peddled by those without a theocentric worldview.  As I said in my earlier post, it's not the number of people that's the problem but their sinful behavior.  Sometimes during the climate-change debate there is the insinuation that fewer people would lead to a better environment and that therefore curbing population is a good thing. As Christians we should reject the Neo-Pagan elevation of the environment above humans and reject the logical and moral fallacy that care for the environment somehow equates to fewer people.  There are positive reasons for more people (image of God,  increased evangelism & cultural mandate) and dangerous ways of curbing population (abortion & infanticide).  Over-population is a phrase loaded with moral assumptions we should reject and logical assumptions that are faulty.

Update: Since I seem to be gaining a bit of Internet traction on this topic I want to affirm that there is a clear biblical mandate for Christians to care for our natural environment, just not in the manner the PAC paper recommends.
Email ThisBlogThis!Share to TwitterShare to FacebookShare to Pinterest
Labels: Anglican, Ethics, Remarks
Newer Post Older Post Home