'Pollution and the Death of Man' 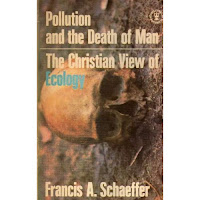 I've grown up in a family that valued the natural environment, saw God glorified in it's beauty but was skeptical of the Green bandwagon and disliked being lectured to by Al Gore. I don't mind being eventually convinced human activity is causing global warming but dislike the pseudo-religious fervor that accompanies it.  So I'll be reading and blogging through Pollution and the Death of Man: The Christian View of Ecology by Francis Schaeffer to get a theological handle on where to go with environmentalism.

'What have they done with our fair sister?'


The death of "joy" in nature is leading to the death of nature itself. (p11) Genesis 1-2 describes God's pleasure over his new creation and our connection to it. Schaeffer suggests that as Christians we've lost this pleasure in the larger creation.  The chapter itself however is named after a line from 'Strange Days'  by the Doors, which accuses humanity of destroying nature.  Schaeffer shows that there is sense amoung some that the Christian view of having dominion over nature has lead to this destructive impulse and it is suggested a more Buddhist approach of having "one essence" (p14) would lead to better care for the environment.

I like where Schaeffer is going, as Christians we need a bigger framework of care and joy for the environment that reflects God's initial creative pleasure.  Schaeffer, true to form, notes that an ecology requires a philosophical basis and in the current debate about environmentalism the Christian theology of ecology is simply replaced with a pantheistic theology of ecology. I wonder if this is Byron Smith's intention in his chronicle of outrage over environmental degradation; to recapture the larger Christian view of ecology without jumping on the pantheistic bandwagon by mistake?
Email ThisBlogThis!Share to TwitterShare to FacebookShare to Pinterest
Labels: Book Reviews, Ethics, Schaeffer
Newer Post Older Post Home