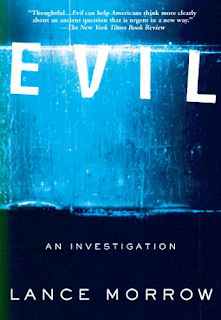 Lance Morrow, essayist and TIME magazine journalist somewhat optimistically tackles the topic of evil in Evil: An Investigation a sort of modern moral survey of evil.  I was going to say 'ambitious' but he concedes very early that "my conclusion is that it is ultimately not possible to understand evil" (p3), instead I think the book is 'optimistic' because his philosophical outlook is detached but upbeat.  For example, most of his, often depressing, anecdotes, are explained or set in some sort of context.  I think Morrow's taxonomy of evil is accurate, even if overall he isn't able to make sense of a world with evil but without God.

Morrow recognizes that evil cannot be simply an adjective of novelists or a term for aberrant behavior for sociologists.  His dismissal of post-modern subjectivity, as a "dangerous fantasy" (p136), shows that for him evil despite being a moral and metaphysical category is nonetheless very real.  Morrow in his stories about modern crime, Balkan atrocities or ancient criminality always puts people front and centre.   Evil is disturbing because it is, correctly, for Morrow quoting the poet W. H. Auden "unspectacular and always human" (p16).

The most useful part of Morrow's investigation is his definition of evil.  While the term is slippery, it's not impossible to pin down.  Morrow intriguily extends Justice Potter Stewart's iconic definition of pornography "I know it when I see it" to "I know it when I feel it. Evil registers itself on the deepest, most primitive faculty of the brain, upon some obscure moral equivalent of our sense of smell." (p28)  He then goes on to say it's a sort of "vibration" (p31) constant through history and circumstances, not a part of the world but a distortion, a degradation of us and the world.

Evil is indeed a metaphysical moral category: "the tree of the knowledge of good and evil" (Genesis 2:17).  We knows it's there because we see it, we recognize it. "your eyes will be opened, and you will be like God, knowing good and evil" (Genesis 3:5).  But also unrecognizable in another sense, alien to creation: "What is this you have done? [asks God]" (Genesis 3:13).  Morrow goes on to correctly note that evil is a usurpation of God. "Evil is an imitation of God - of God's inscrutable, peremptory mysteriously smiting self.  This, again is the evil of a usurping pretender: the insurrection of the negative" (p37).  This seems to me to echo the Apostle Paul: "[Jesus] did not consider equality with God something to be grasped." (Philippians 2:6)

Why is there evil?

Morrow is clear when describing the horns of our human dilemma, 'evil exists but why?' "Do people choose to do what they do, or are even manifestly evil acts (such as serial killing) predetermined - the wires of slaughter and atrocity and genocide, for example manipulated by other forces? By heredity? By brain chemistry? By God?" (p35)  He understands the dimensions of theodicy: "How can there be a God who is 1) all powerful and 2) all good, while 3) evil exists in the world. You can have any two of those propositions, but not all three" (p176).

Perhaps it's an extreme form of rage, he ponders, as demonstrated by the festering emotion of Hitler's Mein Kampf eventually exploding into the Final Solution.   Often he notes it is accompanied by and is feed by self deception.  When he meets Serbian soldiers during the Balkan wars of the 1990's Morrow wonders "How did the Serbs keep on? How did they explain themselves to themselves" (p60)?  Clearly "evil is usually an exercise of power" (p109), the abuse of the vulnerable, the children, those in poverty.

Is there a solution?

If there is place where Morrow stumbles it is in providing a solution.  The anecdotes become confusing, for example the closing one about former South African President de Kock, offers little solace in a chapter designed to bring moral closure and hope. He knows he has a problem on his hands; "The academic's story [about a young American soldier killing German prisoners] haunts me a little" (p82).  But the solutions are hopelessly inadequate. For example evil is more than just "a story" (p39), and a "learning experience" (p47).  Yes, "shame" (p69) and "more information" (p69) are important parts of resorting justice, love and honor but they cannot staunch the wound he's opened.  I was very interguied by the way he suggested literature could be some sort of healing balm, a constant during Job-like storms (p170).