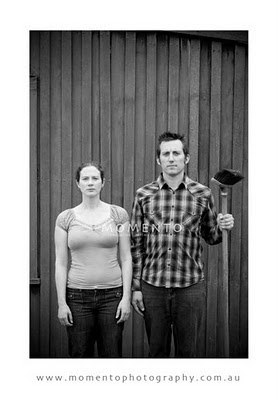 A friend of ours took this photo of us parodying American Gothic, (Margate style!) at the end of a photo-shoot.  The original occupies that strange space of being both "Art" and a recognisable symbol of Kitsch.  We shouldn't be too harsh with Kitsch as long we identify it for what it is; recognising that it occupies a legitimate place in our culture and affections while not over-emphasising it's artistic value or ideological significance.

I think it's the same with Christian sub-culture, "sub-culture" is unavoidable when humans gather regularly.  Sometimes Christian sub-culture contains elements of Kitsch or things that aren't as smooth or trendy as the surrounding world of fashion, technology and architecture. This is OK, as long as we identify it correctly, own up to it and don't over-value it.  Hymns, photocopied newsletters, bad-coffee, someone with a funny voice, old people and clip art.  If the ideology is true, noble and beautiful then the rest of Christian sub-culture will fall into place as God irons everything out.  If we're being honest we'll recognise the place for both 'Kitsch' and beauty.