"Morality is simply a function" 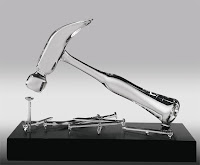 I've recently discovered the ABC Religion and Ethics section (I'm a slow learner!).   In this article from the 5 April, Russell Blackford editor of the Journal of Evolution and Technology and a professor at University of Newcastle argues that morality can be measured.  Startling at first until you realise he's simply suggesting that morality, "good" and "bad" are functions.  So for example says Blackford the function of a *good* hammer is that it is;


"solidly constructed so that its head won't come off the handle. Furthermore, its head is of hard metal that won't dent, has enough weight to deliver adequate force, but is not so heavy as to be difficult to lift and use for the purpose."

His aim, he says, is to "demystify" moral judgments not to "debunk" them.  No doubt because moral judgements, in this world, are inescapable.  However as tidy as this all seems, his argument of morality as functionality is part reductionism and part avoidance of larger issues. He neglects (deliberately?) to explain the place of ultimate functions eg of humans or an individual's life and doesn't deal with the concept of 'evil'.  For example is killing simply the function of a serial, furthermore why does functionality seem to fail as such as useful guide at this point?  Somewhat unsurprisingly Blackwell has no answers.
Email ThisBlogThis!Share to TwitterShare to FacebookShare to Pinterest
Labels: Ethics, Philosophy
Newer Post Older Post Home