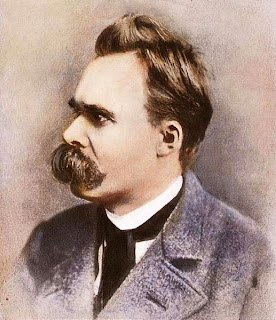 In the final third of Suspicion and Faith, Westphal uses the suspicion of the third member of his triumvirate: Nietzsche, to critically examine the use of power as it's covertly or even overtly expressed in piety. (Previous sections: Freud and Marx.) Nietzsche is the most anticipated of the three, in part because his master-slave system of morality is the most destructive analysis of the three (p232-235). Freud goal is constructive; deeper psychological analysis and Marx while breaking the capitalist system envisages a better one (socialist) to replace it. Nietzsche however, "regards the most basic human drive as 'the psychical extravagance of the lust of power!'" (p222) A "will to power" that permeates all human activity, either in the attempt to take it, by the 'slaves' or the exercise of it by the 'masters'. Nietzsche's critique therefore "focuses on the discrepancy between the religious affirmation of altruism and the will to power he detects at its origins" (p224).

Nietzsche's critique
Although Nietzche was the most fascinating of the three, the critique Westphal presents doesn't feel as sharp, perhaps the element of surprise has been lost by working through previous two sections or  perhaps the role of religious leaders in our Modern Western culture has been diminished in recent times?  "It comes as no surprise that Nietzsche interprets the priest as an expression of the will to power" (p240).  But the lack of sting makes Westphal's observation no less true or important:

"When Nietzsche argues that physical, political, or spiritual incapacity to do evil is not virtue but rather, when it pretends to be, sheer hypocrisy, it may well be that he is doing something very much like what Jesus and the prophets did, protesting against a corruption of the spiritual life that disguises itself with a veneer of spirituality" (p251).

Essentially Nietzsche's obsession with the "will to power" reveals that "we can easily be fascists, for example, in the manner we apply or extend non-fascist values" (p255).
Email ThisBlogThis!Share to TwitterShare to FacebookShare to Pinterest
Labels: Book Reviews, Theology
Newer Post Older Post Home