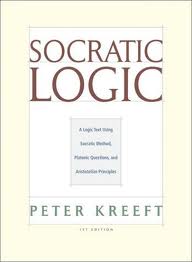 Thinking, says Peter Kreeft in Socratic Logic, is a three part process; understanding, judgement and reasoning. Kreeft's main focus here is the deductive process, from the general to the particular (whereas inductive is from the particular to the general).


(True= corresponding to reality)
Update:
Kreeft gets to syllogisms later in Socratic Logic, but for a great introduction check out the latest post from Radagast's blog.
Email ThisBlogThis!Share to TwitterShare to FacebookShare to Pinterest
Labels: Philosophy, Thinking
Newer Post Older Post Home