Making the Most of the Cross by John Chapman 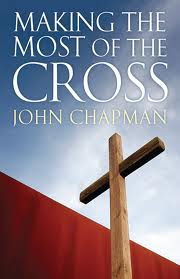 This is John Chapman's second book since he retired to a nursing home! The old evangelist is still active; dedicating the book to the nursing home bible study. This makes his chapters about the Resurrection and our death all the more poignant. While the book itself is simple, short chapters and a direct writing style, I found being reminded of the theological consequences of Jesus' death and resurrection very refreshing.

Primarily it was good to see reinforced the idea that while the Crucifixion and the Resurrection "are two aspects of the same event" (9) there are a number of different consequences from each. The book is basically a survey of those consequences. Jesus' death saves us from the "wrath that is to come" (1 Thess 1:10). It's a substitute for our death (1 Peter 2:24). The metaphor of ransom (Mk 10:45), echoing the imagery of the kinsmen redeemer, illustrates our powerlessness and the high cost of this substitution. God is propitiated by the Crucifixion of Jesus (1 John 2:1-2). An added consequence of Jesus' death is that the Devil is defeated (Col 2:13-15), in a sense filling out the rest of redemption metaphor, "we're free" (39). The tension between God's justice and our guilt is resolved by God's declaration of righteousness because a substitute has redeemed us from bondage.

Although Chapman doesn't explicitly frame the next two chapters in this way, they are the relational and emotional consequences of the crucifixion. In chapter seven he writes: "If God accepts me because of the death of Christ then I expect you to accept me on the same basis. It is not that we are naturally drawn to each other, but that we are made acceptable to each other because of Christ" (48). Then in the next chapter Chapman describes the interchangeable images of the Crucifixion resulting in our forgiveness/cleansing, our sin being cancelled or erased.

For the Resurrection to make any sense, Jesus needed to be really dead. An obvious point it seems but the one on which Christianity turns. Returning from the dead is highly unusual says Chapman and it'd be odd to concoct such a story, "what would you gain?" (60) Many people die for various causes, but why would that original cohort die for a known falsehood? The first consequence of Jesus' return to life is that reveals him to be the eternal King (Acts 2:36 & 1 Chron 17:4-14). A King brings justice and judgement, and a living Jesus makes that a certainty. Resurrection is also proof Jesus paid the price of sin, death. In a very sharp observation from a man not far from death Chapman then writes in chapter thirteen: "The fear of death can lead us to do all sorts of wrong and evil thing. But Jesus tells us not to fear ... He has walked the path of death that we too must walk" (79). He concludes with an expression I hadn't considered, we live in the twilight between the Crucifixion and the Resurrection, upset by the Cross and not yet astonished by the Resurrection (90).

[Making the Most of the Cross by John Chapman. 2011, Available from Matthias Media]
Email ThisBlogThis!Share to TwitterShare to FacebookShare to Pinterest
Labels: Book Reviews, Jesus
Newer Post Older Post Home