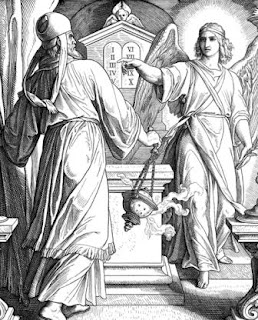 There is so much to say about Justification, my potted summary will not do it justice. But let me lay out a few thoughts, starting with a visual image. The old testament prophet Zechariah (Zech 3:1-10) describes a vision of the High Priest Joshua being plucked from the fire and brought before God dressed in filthy robes with Satan accusing him. But God orders that Joshua's filthy robes be removed and to have him dressed in a clean turban and clean robes. Zechariah then ties this to the events of the crucifixion: "and I will remove the sin of the this land in a single day." (Zech 3:9) This act of clothing the high priest Joshua is excellent visual summary of God's declaration of us as righteous. Despite our depravity and regardless of our merits ("for all have sinned and fallen short" Rom 3:23) we are counted as righteous on the basis of Jesus' obedient sacrifice.


Lionel Windsor helpfully summarizes the two terms at the heart of this doctrine.

This summary is echoed by Leon Morris, who is keen to emphasize that while righteous may occasionally be used to describe ethical behavior it's primary use is legal. " ... for in the sense of an ethical virtue righteousness cannot be a gift." (The Atonement: it's meaning and significance, 196)


Romans outlines both the universal guilt of humanity and our inability to merit God's declaration. But in an act of mercy God redeems us through the sacrifice of Jesus. "[God] did it to demonstrate his justice at the present time, so as to be just and the one who justifies those who have faith in Jesus." Leon Morris writes "God wills that the penalty be borne, but he wills also to bear it himself." (The Atonement: it's meaning and significance, 199)
Email ThisBlogThis!Share to TwitterShare to FacebookShare to Pinterest
Labels: Justification, Ordo Salutis
Newer Post Older Post Home