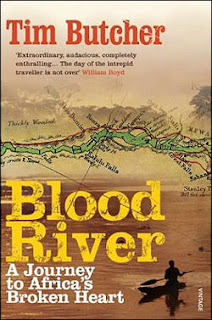 Blood River is the story of a British Journalist's re-creation of Stanley's epic cross-contient tracing of the Congo River.  I remember during high-school hearing about the unfolding atrocities during the Rwandan genocide, but Blood River highlighted the horrific war that took place in neighbouring Congo after the fall of Mobutu, one of the world's crueler dictators. The Congo (nomenclature depends on the regime) like Somalia is a vast lawless country but unlike Somalia is rich with natural resources. One of the notable features of Congo is how most injustice goes unrecorded, unlike say in the Balkans where the combatants have long communal memories, the massacres, rapes and the complete destruction of infrastructure just piles up unnoticed by the rest of the world and lost to the combatants themselves in a haze of violent depressing conflict. In the end only God remembers and will met out justice to the perpetrators.

For example one of several Congolese Butcher meets says: "I have one son and one daughter, and I carry them with me when we have to run away. I don't know who is fighting who here anymore. Everyone says they are against the government or for the government. It is not important. We all know it is not safe to stay here so we just flee." (p172-173)

No doubt there are large scale political and economic solutions although as Butcher shows at a couple of points in his narrative these may be well meaning but are generally hamstrung by incompetence (Western and local) and greed (Western and local). What was interesting was Butcher's positive encounter with a CMS Missionary working along the river. It's Christians working within a Christian worldview who will change the Congo, not a revival of African tribalism or Western Imperialism. For example my sister in law who gave a copy of Blood River to me as a birthday gift has started a project training local Congolese medical staff.
Email ThisBlogThis!Share to TwitterShare to FacebookShare to Pinterest
Labels: Africa
Newer Post Older Post Home