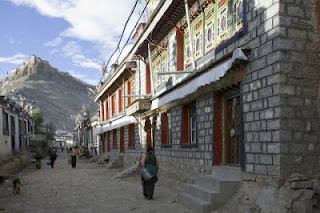 According to this TIME magazine article by Clarissa Sebag-Montefiore, "evangelical Christians" are trying to convert Tibetans. I think it's great news and I particularly enjoyed these two paragraphs.

Tibet is one of the most coveted locations for nondenominational American and Korean Christian groups angling for mass conversion. Most are fundamentalist Christians who prioritize preaching and winning converts over the charitable works traditionally performed by mainstream missionaries. The more radical evangelists believe in the biblical notion of the “Great Commission” — that Jesus can only return when preaching in every tongue and to every tribe and nation on earth is complete.

On websites like the U.S.-based Joshua Project, ethnic minorities are seen as “the unfinished task.” Of these, “Tibet has long been one of the greatest challenges,” reads a summary. “In 1892 Hudson Taylor said: ‘To make converts in Tibet is similar to going into a cave and trying to rob a lioness of her cubs.’”

We want Tibetans to become Christians and abandon Buddhism and to some extent Chinese rule seems to be making this easier. However I wonder what the place of Tibetan autonomy (once a trendy Western cause, remember Richard Gere!) is in the world view of Tibetan and Chinese Christians?