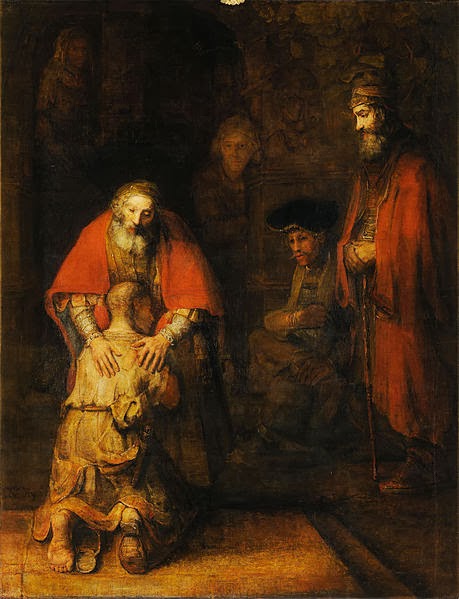 Forgiveness is relational, it doesn't happen in a vacuum. God doesn't wear glasses and croak "oh, all you people down, I can't see you individually but I forgive youse all." The way some people present Jesus on the cross makes God sound like that. For example: Jesus in his pain allegedly forgives the pagan Roman soldiers, the rebellious disciples, including Judas, the arrogant Temple leaders and perhaps even the whole world, in one fell swoop (Luke 23:34)! That would mean that God is in a loving covenantal relationship (2 Peter 1:4 or 1 John 4:13) with every single person who ever was and will be, including the pagan Roman soldier who'd just prayed to Zeus before stabbing Jesus. This isn't to say some were forgiven at that moment, including the watching centurion who confesses Christ (Luke 23:47) and the relationship with Simon Peter is restored lated on the beach (John 21:15-22).

But back to forgiveness itself. It's completely the decision of our self-sufficient God, who gains nothing and for reasons we're don't completely understand or can imagine forgives sinners. Motivated by love and at great cost, the death of his Son, the Father forgives sinners giving providing us with hope, a way out of sin. Forgiveness therefore is a consequence of the atonement (a metaphysical result of God's action: we're no longer facing retribution) and a permanent part of our identity during sanctification.


Forgiveness is hard to translate into a broken world. It's hard enough to be forgiven. Don Carson helpfully (somewhere, maybe I'm using his name in vain) explains that forgiveness is a stance you adopt in anticipation of our post-judgement day life. I picked up some self-help advice somewhere that says that it isn't beneficial to carry hate and unforgiveness around in your head. This rings true, because after Judgement Day it won't be like this, we're on a trajectory to the whole, healed life, let go of the hate. Adopt a stance of forgiveness because God forgave you, at great cost. Forgive as you have been forgiven.

Forgiveness is also incomplete and it's not the antithesis to conflict. On this side of eternity some relationships will be fragile wispy ones, even among brothers and sisters in God's gathered community. It's not until Judgement Day that the truth of every motivation of every event will be revealed. All societies struggle with conflict and have different strategies of dealing with it. Personal survival and public reputation are very important in the West and so forgiveness is sometimes difficult to put into practice. It makes you vulnerable and takes precious energy!