Why do we keep fighting the Atonement theory battles? 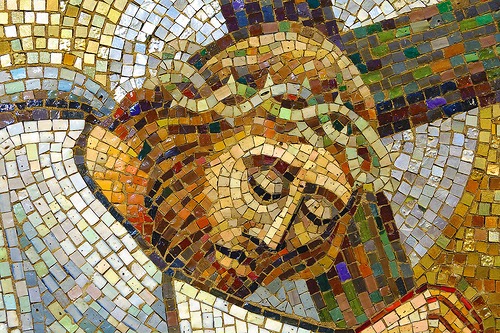 Battling for the supremacy of a particular atonement theory, is counter productive. Here is a very recent example from Michael J. Kruger at the Gospel Coalition website: 'Did Early Christians Believe in Substitutionary Atonement?' Undoubtedly they did to a degree, although it seems they preferred the Battlefield metaphor (Jesus' death is an ambush of his enemies, rescuing the captives and bring peace.) until Anselm reminded us of the Judiciary or City-Gate metaphor (The just punishment of sin is carried out and clemency is simultaneously provided, the former on Jesus and the latter on us.)

Kruger opens his article rightly rebutting the lazy secular historiography that says that various aspects of Christian theology are modern inventions. These types (of the Dan Brown school of theology) should read Origin of the Species before commenting on Christian doctrine! It's an evolution of previous material, not a 'deus machina' of new doctrines. (Even in Islam, which is a 'deux machina' of sorts as Muhammad receives his revelations in the Arabian desert, is a mashup (fan fiction?) of Christianity.) Anyway Kruger says Substitutionary Atonement gets a bad rap for being brought into the limelight by Anselm. (Incidentally you could say the same thing about the Trinity and Athanasius or Original Sin and Augustine, Jesus and the New Testament or even Moses and the Law!) On the one hand I want to cheer Kruger's attacks on the vagaries of Bishop Peter Carnley or Rob Bell. But on the other hand I'm left wondering why he staunchly sticks to the schema of competing atonement theories? Aren't there five different metaphors, some of which get more airtime or prominence than others, which have been more or less favoured through Christian history? Just because the Judiciary (law court) metaphor didn't get as much air time before Anselm doesn't change it's prominence in Romans.

You can see it all in Kruger's final paragraph:


The Epistle to Diognetus shows that the doctrine of the substitutionary atonement and the imputation of Christ's righteousness are not wholesale inventions of later Christians, but were present, at least in seed form, early in the history of Christianity. Did some Christian groups hold other views of such matters? Sure. But the continuity between the teachings of this epistle and the writings of Paul himself (see especially Romans 5) make it evident that the substitutionary atonement/imputation view goes back very early indeed.

But a more fruitful contribution would have been to demonstrate the relative place of each metaphor in Scripture, and note how the various 'atonement theories' is simply drawing out the Biblical focus of a particular atonement metaphor. Given the rise of Biblical Theology, it seems wiser to note within a given piece of Scripture which Atonement metaphors are present or emphasied.

[Mosaic of Jesus carrying the Cross from Christ the King Chapel, photograph by Mark Scott.]