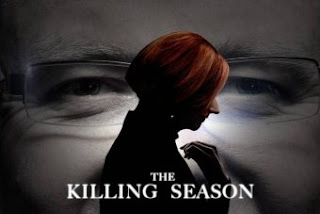 There's a brouhaha at the moment about the ABC favouring left-wing politics. However The Killing Season, a three part Television special from the ABC, is a fascinating overview of the brutal, messy, sometimes noble and often grubby story of the Rudd & Gillard leadership saga. There are a number of interesting aspects; for political junkies you get a great fix re-visiting all the key moments and getting reminded how different parts of our parliamentary democracy works. For those interested in politics more generally it's a great insight into the last decade of the Labour party and it gives you an insight into some of it's present day players, such as Bill Shorten. It's also a very intriguing portrayal of human nature and leadership. This particular leadership struggle played out in a unique way but leadership struggles and dirty political leadership struggles are never unique. In way it was good to watch and analyse human nature without the horror of actual death that often accompanies a leadership change throughout most of history. I recommend the show for political junkies, leaders and those interested in the machinations of the Labour party, for good or for ill.

Just a thought on leadership; I wonder if there's a good and a bad way to do politics, in its very broadest sense of managing expectations, relating to other leaders and making decisions. Early in the series Kevin Rudd refers to it with a knowing smile as the "dark arts." At what point does networking, publicly presenting information, making plans, appointing leaders, having discussions and releasing information become corrupted and descend into full-blown sinful conniving? For example, can you give a candid assessment of a rival leader without being slanderous or maneuvering for some personal gain, present or future, obvious or implicit? If the acid test is a question of who has or wants power, then we'd need an imaginary alternative world without leaders. Nor can you pretend to be above the fray, "factions you say ... what factions, we're all friends here." Is politics, like warfare a necessary but temporary part of life on this side of eternity? Is it an Ecclesiastes type of living, being wise with what you have "under the sun"?
Email ThisBlogThis!Share to TwitterShare to FacebookShare to Pinterest
Labels: Australia, Politics
Newer Post Older Post Home