The Gospel and Gender 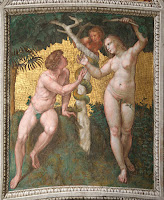 Friends of mine have been irked by John Piper's prescriptive tone and roundabout reasoning when it comes to applying gender differences to real life. A breezy quote from Carl Truman illustrates how some are feeling about modern evangelical Complementarianism:

"I rarely read complementarian literature these days. I felt it lost its way when it became an all-embracing view of the world and not simply a matter for church and household.   I am a firm believer in a male-only ordained ministry in the church but I find increasingly bizarre the broader cultural crusade which complementarianism has become."

I know what they mean, I remember Amy reading something from Douglas Wilson to the effect of 'the maximum involvement outside the home Wilson would recommend for wives would be running a flower shop.' This type of thing is why CBMW runs the risk of appearing lopsided, prescriptive and middle class-ish.


However the problem is that if we follow Trueman we are left with very little to say about gender, and then marriage, let alone society! Wilson rightly observes that Trueman creates a little conservative village ("male-only ordained ministry in the church") that has nothing to say about the big wide world. You see this worked out in the modern conservative arguments against gay marriage. It's primarily about the children and a few problematic verses from Paul and the Old Testament. Surely there is larger case that arises from the theological ideas of Scripture? Surely there is a theological basis for gender differences? Isn't the scope of the gospel larger than Sunday morning?

There's also an urgent need for a comprehensive but accessible evangelical theology of gender. Without a doubt the scholarly work has already been done and an outline of what needs to be said is easily sketched, but there's a gap here in Evangelical communication, we need memorable summaries informed by evangelical scholarship. Preferably something that provided detail for the outline below and that has interacted with both sensible and outrageous secular material on gender.
[c1510 Fresco in the Vatican of Adam and Eve by Renaissance painter Raphael]