The psychology of the Donatists 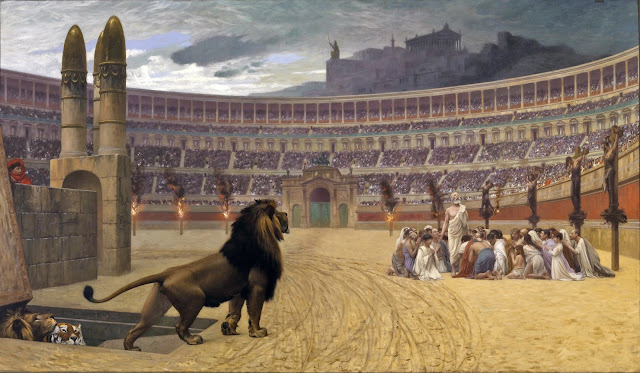 The Donatists were the descendants of Christians who had not compromised during Imperial persecutions.  The 'Great Persecution', the last Empire wide organised attack on Christianity and Christians took place under Emperor Diocletian. Diocletian was a solider who rose through the ranks to become Emperor after Carus in AD 284 died in battle. Apart from persecuting Christians he's known for securing the Imperial borders and stabilizing the Empire. In 303 he issued edicts ordering everyone everywhere to worship Roman gods. The intensity of the enforcement and subsequent persecution fluctuated, depending mainly on the malignancy of local officials. With the ascendency of Emperor Constantine, Imperial persecution faded and was officially extinguished with the Edict of Milan in 313. The effects of the last persecution with its offical demands of public pagan sacrifices were long lasting. The Donatists were Christians who resisted the Imperial edicts to give some sort of public repudiation of Christianity or provide a public act of fealty to the offical Roman gods. They maintained the purity of the church and fiercely resisted the reinstatement of church leaders who'd publicly betrayed the faith. Augustine devoted a lot of theological energy in the late 300's to the early 400's to making the case for the continuity of the Catholic church, arguing that the faithlessness of an individual did not invalidate the church's ecclesiology and sacraments. Eventually and ironically the Donatists were driven underground and into the North African mountains by force and completely disappeared with the Arian Vandal invasion of North Africa in the mid 400s.

The Donatists were concerned with the purity of obedience and the delight of holiness, standing their ground against the hypocrisy of compromise. For example some Christians offered sacrifices to pagan gods with their fingers crossed behind their backs. If you're a persecuted minority, the emotive power of purity, of being morally superior to the surrounding majority, protects you against the corrosive power of the crowd. However the danger of the Donatists is legalism; obedience and longevity becomes more prized than grace. Donatism is also ultimately unenforceable because every infraction must be measured for its potential betrayal of the faith and it can also breed its own form of hypocrisy, were faithful activity masks a lack of internal spiritual change. Contemporary Christianity in the West, including my own denomination, is currently wrestling with the tempting psychology of Donatism.  Do you remain part of a corrupted Marriage Act or keep yourself pure? It's also a wider cultural question, at what point is my testimony that Jesus is the Messiah, the Son of God, corrupted by my participation in the world? How do we delight in and extend grace, while also keeping our hearts, hands and words in alignment? I wonder how our Middle Eastern and Chinese brothers and sisters square 1 Kings 5:17-19 with John 21:15-25?