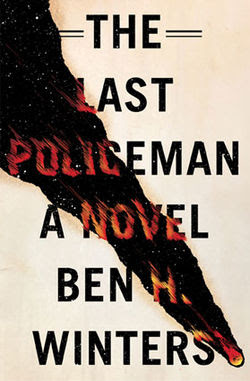 If you enjoy science fiction you should soak yourself in the world of The Last Policeman. The trilogy by Ben Winters is a fresh angle on the end-of-the-world, following the investigations of a young police detective, Henry Palace, during the final year of the world before a meteorite strike. Some end-of-the-world novels can ponderously ominous in setting the scene but Winters mangers to paint a convincing slow collapse of civilisation and places the most refreshing hero I've encountered for a very long time in the midst of one small corner of it. The anti-hero has become a popular but weary trope in modern fiction, so watching Winters across the trilogy navigate the wreckage of the modern world was an amazing experience, up there with say Hazel from Watership Down leading his small band through ruin and danger; noble without being naff. The other fascinating sub-current of the trilogy is the way people behave and respond to the approaching comet. (For those with more stamina but a taste for this sort of thing might be interested in Lucifer's Hamer, the sprawling epic from the 1970's about a comet strike. Which I listened to recently on a drive to Melbourne.)