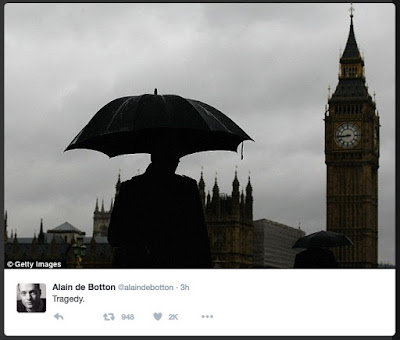 In a day that was parallel to the Breakup of the Soviet Union, with immediate and long term repercussions in a year of interesting elections, came a result traditional polling with all it's money and methodology failed to catch, the United Kingdom voted to leave the European Union. BBC coverage was lack-luster, with clumsy graphics, dull presenters and a absence of gravitas. Almost as if it began as a case of, "nothing to see here, we'll put this euroskepticism to bed". Not only is this a big deal for British history, there is a delightful philosophical good news as well. But first a word about left and right wing-ism. The actual voting, apart from Scotland, wasn't along party lines, but there is a media narrative that being pro-leave, is somehow mean and racist. In good times, people have a chance to be kinder and explore the ambiguities of life. If life is tougher, you want the tough guy to be on your side and your suspicious of the outsider. This is why with improved life-expectancy societies tend left. The xenophobia we saw a bit of in the lead up to the vote has a long sad history and the murder of that young politician, Jo Cox, last week is a sad example.

But here's the philosophical upside. The tendency in the modern technological era is towards centralised bureaucracies and specialised experts. "Don't worry, the government knows best." The European Union is built on a system of technocrats organizing things. Now don't get me wrong, good things can come out of collaboration, the economies of scale and experts. But generally good things occur in-spite of human nature, not because of it. And in the lead up to Brexit there was a chorus of politicians, celebrities, various professional bodies and business groups telling people not to leave the European European Union. So it's really refreshing to see the devolution of power on such a grand scale. You don't often see so many people rejecting the advice of their betters on such a large scale and you don't often see the winding back of centralization.