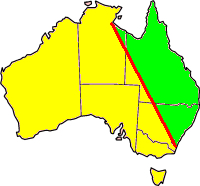 I prefer a few of the cultural aspects of sport, for example the film Moneyball (2011), or the fact that the Greenbay Packers are locally owned by their supporters, or observing the rise and fall of Lance Armstrong than actually watching or following any of the sportsball itself. "Did you see that ludicrous display last night!" By the way because I'm a minister seeking to be like 'a gentile to the gentiles', I've adopted an AFL team and even own their offical scarf to wear when they win, which isn't very often. But here's a fascinating sport and geography related phenomenon: 'the Barassi Line'. A cultural boundary running across Western NSW separating the rugby playing north from the AFL playing south. Here in Horsham the whole town turns out to watch football & netball, while Rugby is seen as an exotic hobby, the local rugby league stretches across all of the Wimmera and into South Australia as far as Mount Gambier. But by the time you reach Wagga to the north-east of us, both codes via for attention.

Another interesting boundary is the range of Lutheran settlement in Western Victoria. Every small town in the Wimmera and southern Malle has a Lutheran congregation (e.g Natimuk, Kaniva, Edenhope, Murtoa etc) , but by Ararat and the beginning of gold country they've dried up. Speaking of boundaries, Horsham sits on the border of wheat and sheep, probably more of a climate and landscape boundary than a cultural one, with sheep to the south and wheat to the north. Borders are fascinating both because of what's used to define them but also because of the the ambiguity of the territory right at the edge of the two regions.
Email ThisBlogThis!Share to TwitterShare to FacebookShare to Pinterest
Labels: Maps, Remarks, Sport
Newer Post Older Post Home