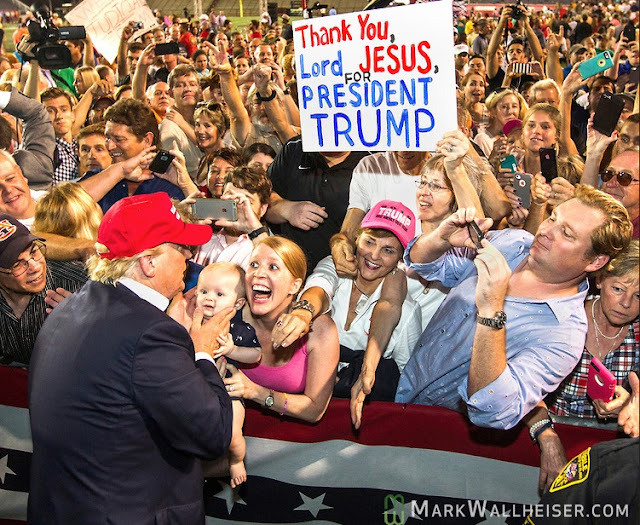 Paganism is our default religious setting. Its primary values are hearth (television, fireplace or table), family (people grouped by sexual relationship, partners or products of) and security (yard, car or neighbourhood). Morality of course is common to everyone, even for the fastidiously neutral Anarchist, but it varies. Varies between the marketplace, hearth and castle. Tools and spirits are leveraged not for morality but for preserving the hearth, family and security. Effective nationalism allows paganism to flourish by reducing the monolithic power of the centre and external existential threats.

This is what Trump represents. His relentless focus is not on an ideal and ideological 'American Exceptionalism', but on a place protected by tariffs and safe from existential threats. However as I've observed before, paganism is mediated by power and it lacks imperial stability. Voters gave Trump's personal morality a pass because as everyone tacitly acknowledges, morality varies, paganism is diverse. Clinton had an ideological vision for America and the world, a vision that was obscured by her nearly successful campaign-play to paint Trump as dangerous and risky.  She was a champion for democratic-liberalism, which lately has become coupled with sexual self-determination, grievance and control. That agenda was to be imposed on everyone either by power or by persuasion. So Trump said and did what was necessary to win, allowing anti-semites on the one hand and pro-lifers on the other hand, to read into him whatever they liked (Note his cunning delayed disavowal of David Duke and then his proud display of a 'LGTB for Trump' flag at one of his rallies.).

But if we get caught up in Trump's contradictory waffle we're in danger of missing Trump's central message, which is: "I'm going to let you all flourish, just as I myself have". His personal hearth, family and security are on an opulent scale, but beyond that he simply doesn't care, simply does not have an ideological agenda, he'll increase some taxes and decrease others, he'll offend some people and be extraordinarily conciliatory towards other people, and there will be no discernible rhythm or reason to it all, although many will read there own agendas or fears into his behaviour.

You can see that all represented above in Mark Wallheiser's iconic campaign photograph. Part of Trump's rise to power was to favour law-and-order over and above the treatment of black people and to be harsh on Latino immigration, so the crowd is overwhelming white. Trump lacks an ideology, so he is hardly inclined to impose one on other people and is also happy to appoint morally conservative judges (if it suits him), which is a relief for Christians and explains the cardboard sign about Jesus. Lastly, people are happy to meet him. Smart politicians like people and he is unashamedly a politician, happy to seek and wield power, but he doesn't pretend to be an ideologue and isn't driven by ideology (for better or for worse).
Email ThisBlogThis!Share to TwitterShare to FacebookShare to Pinterest
Labels: America, Politics
Newer Post Older Post Home