Manufacturing Consent by Herman and Chomsky 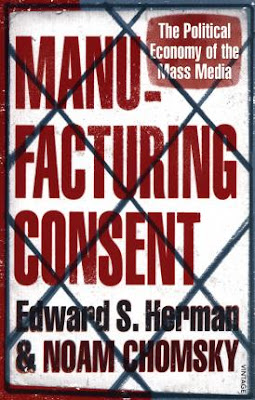 Chomsky and Herman's thesis is that during the Cold War while the American Mass media should've been an independent institution providing information and scrutiny, it ended up as a type of propaganda for the American government. The "democratic postulate that the media are independent and committed to discovering and reporting the truth and that they do not merely reflect the world as powerful groups wish it to be perceived" (xi) is flawed argues Herman and Chomsky in the preface. The 'Mass Media' are defined by Chomsky and Herman as a type of system for communicating messages and symbols to the general public. They observe correctly that the Mass Media ends up serving the needs of "the dominate elite." (1) The best way to understand how the Mass Media functioned during the Cold War is through the "Propaganda Model" (2). Herman and Chomsky break the Propaganda Model into five parts. 1) Size and concentration of ownership, 2) income sources 3) information sources 4) "Flak" and 5) Anti-communist control. The five aspects shape the message communicated by the Mass Media and effect the way stories are told.

Ownership is significant argues Chomsky and Herman, particularly when multiple news outlets are concentrated into a few groups. Advertising is a more important income source than subscriptions or bequests and grants. 'He who pays the piper calls the tune'. Herman and Chomsky show that governments control media narratives by providing photo opportunities, easy to digest summaries and the ability to cite offical sources providing the perception of objectivity and authority. Original research is expensive and lacks the same aura of authority of a government source. "Flak" (26) is a term Chomsky and Herman use to describe how governments, institutions or power individuals mobilise criticism of unfavourable coverage. Lastly Chomsky writing from a progressive point of view observes "The Soviet, Chinese, and Cuban revolutions were traumas to Western elites, and the ongoing conflicts and the well-publicised abused of the Communist states have contributed to elevating opposition to communism to a first principle of Western ideology and politics." (29)

The case studies Herman and Chomsky select, while aptly proving their central thesis, reflect this view that the ideology American Mass Media was primarily motivated by Anti-Communism. While I'm more interested in Chomsky's analysis of Media subjectivity than his politics his case study about worthy and unworthy victims was a sobering reminder that the opposition against Communism was marred by gross media manipulation. Chomsky and Herman compare media coverage of the murder of a Polish priest by the communist government with the murder two central American priests by their Pro-American and conservative governments during the Cold War. It's interesting a simple comparison of coverage reveals such a radical disparity.
Chomsky's conclusion is fascinating. He writes that while the mass media should serve a "societal purpose" to inform and explain it ends up "inculcating a defence of the economic, social, and political agenda of privileged groups that dominate the domestic society and the state." (298) While his case studies are from a previous season of history, and his politics are progressive his analysis is accurate. It'd be fun to read his thesis with modern examples and taking into account new and alternative media. The very end of the book contains a short summary of how the subjectivity of the Mass Media shape present their stories individually and collectively.
Email ThisBlogThis!Share to TwitterShare to FacebookShare to Pinterest
Labels: Chomsky, Media
Newer Post Older Post Home