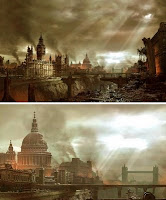 "How deserted lies the city, once so full of people" (Lamentations 1:1)

Post-Apocalyptic fiction is set either during or after a major disaster. It is essentially about how civilisation does or does not survive, who survives and why they survive.

The first apocalypse occurred when Adam and Eve were driven out of the garden of Eden. Since then people have been wondering what would happen if civilisation as we know it dramatically changed. A classic example of this genre, set after a nuclear war, is Z for Zachariah by Robert C. O'Brien. There are some great English writers of Post-Apocalyptic fiction. For example; John Christopher's short and gripping post-earthquake novel, A wrinkle in the Skin or PD James' The Children of Men*, a great introduction to the genre, set in the near future after a very interesting disaster. From America we get the sobering modern release; The Road by Cormac McCarthy and Australia is well represented by Nevil Shute's pessimistic but compelling novel; On the Beach. Film has also been used to explore this topic to varying degrees. Great movies in this genre in no particular order are; Deep Impact, 12 Monkeys, 28 Days Later, Quiet Earth, The Day After Tomorrow, I am Legend, Reign of Fire, The Postman, Waterworld, Apocalypto and the Mad Max series. The recent television show Jericho is a celluloid classic of this genre set in small town America after a nuclear war.

Wikipedia says the top ten risks to civilisation are:
Discover magazine lists the top nine 'world as we know' it ending events:
Not only is the 'Post-Apocalyptic' genre ripe for all sorts of sociological commentary and insights into the human character I think there is a useful theological insight here as well. There are several 'disasters' in the Scriptural storyline: Adam and Eve's expulsion from Eden, Noah's flood, Sodom and Gomorrah, the Exodus, the first destruction of Jerusalem and the Temple, "that great and terrible day of the Lord" foretold in Joel, the death of Jesus, the second destruction of Jerusalem** and the final apocalypse at the end of time.

Some post-apocalyptic pictures from the rust belt of Detroit. [ht Tony]


Footnotes:
* Avoid at all costs the film of the same name, it's based on an idea the director had, after his deaf aunt, twice removed, heard part of the book on audio-tape told her cleaner who passed a synopsis of the plot to the director while he was attending "death to George Bush party." Ahgh I want that hour and a half of my life back.
** This one borders on speculation but given how close some of the NT books were written to this event and it's political and religious significance, it's worth putting into the timeline.