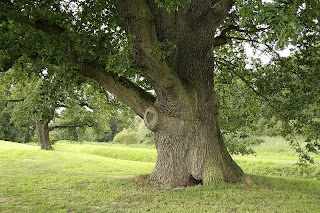 I thought it would be good to round up my thoughts on this year's project which was about Original Sin; specifically how Augustinian was Jonathan Edwards' doctrine of Original Sin.

The short answer is mostly.  In the process of my (relatively limited) research I identified five elements of the doctrine of Original Sin.  It's Adamic, which means it has a genuine historical beginning in Adam.  It has a dual nature, directed against God and having its 'seat' in the human will.  (Sin is God focused yet human centric.)  Augustine and Edwards are of the same mind on these three elements.  Admittedly they sometimes use different phrases but Augustine and Edwards do not diverge from the substantial continuity from the early Patristic fathers through to our modern times.  The differences emerge when we look at the fourth and fifth elements of Original Sin.  Our responsibility for Adam's guilt and the spread of sin from Adam to humanity.  This is where the doctrine gets really tricky to figure out.  Somewhere a distinction needs to be made between the corruption/damage we are all born with that is the soil from which our sinful actions spring and Adam's guilt of rebellious depravity.  We are guilty because in the garden, Adam started a plot to murder God and take his place.  However our local sinful expressions, say for example looking at a website we shouldn't, while an expression of this depravity comes out of a sinful will, corrupted through genetic inheritance.  This is why Christians sometimes keep sinning after they've been redeemed, sanctification takes time.  However Christians are free from Adam's condemnation.  This is why when Christians sin, the relationship with God is damaged much like the way our relationships with good friends or partners is damaged when we say a harsh word to them.  So Augustine gets confused when talking about infants, he knows and asserts they are guilty of Adam's sin but doesn't know why because they haven't had a chance to steal any pears from the neighbours yard.  Edwards steps into the breach at this point and explains that people are guilty and depraved through  imputation on the basis of identity.  Edwards in a very sophisticated philosophical manner shows that we only exist because God recognises us.  Therefore our union with Adam is the ground (or basis) of our imputation of guilt and depravity.   (Augustine argues Original Sin is spread because we all exist in Adam genetically.) This is similar to our union with Christ which is the grounds of our justification and ultimately glorification.

There you have it the doctrine of Original Sin and a summary of my MDiv project.  Go out, love Jesus and stop sinning, it hurts God.  (If your not a Christian this is our explanation for why people are so mean to God and each other.)
Email ThisBlogThis!Share to TwitterShare to FacebookShare to Pinterest
Labels: Analysis, Original Sin
Newer Post Older Post Home