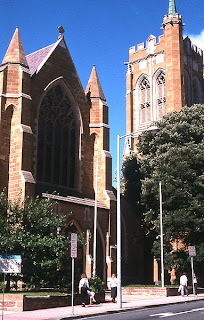 Being at Ridley, it was easy to be Anglican.  However now that I'm out of that collegiate atmosphere I feel I need to more clearly define some of the strengths and distinctives of being Anglican.

1. Theology: Space for being Reformed in my theology.
Despite Henry 8th's sexual shenanigans and political intrigue, the beginning of the Anglican Church is the soil of the Reformation.  Anglicanism is reformed in its theology without being tied to one particular reformer, like for example Luther and Lutheranism.

2. Liturgy: Using the Prayer book
Most churches have a liturgy, generally unacknowledged.  Rather then having to be 'broadly'  creative every service, which is draining, its possible to be 'narrowly' creative, making each word count, using the variables to express different emotions and ideas.

3. Preaching: Cranmer put together a series of sermons that clergy had to preach across England. They're remarkably orthodox and promoting preaching at time when it was undervalued.  Modern evangelicals sometimes assume preaching was always a central part of the service (even when done badly) however credit needs to go to Cranmer and his homilies.  I like being in this heritage that values orthodox preaching.

3. Polity: Parishes, bishops, synods and lay ministers.
I know some of my readers will disagree but I'm not convinced life long elders are the best thing. Also, this may seem counter intuitive, the geographically based parishes are a great idea.  Travel at the moment is surprisingly cheap, however people, while being aware of wars in say South America, live, do chores and eat locally. The entire system is valuable, with the relatively modern system of Synods a helpful balance to the power of a bishop.

4. Cultural Presence: Protestant Cathedrals, churches in towns and architecture.
There is something refreshing about stepping out of a busy summer midweek Murray street into the quiet cloisters of St Davids.  I'm not convinced Anglicanism was ever the state church of Australia, but its role as a visible cultural institution is still very useful for ministry.

5. Historical Context: Cranmer and co.
Cranmer used Henry's maneuverers to build what was a strongly protestant English church. For example: Scripture in the vernacular, preaching, doctrine of justification etc.  These things are a good context, a good basis for identity and future action.
Email ThisBlogThis!Share to TwitterShare to FacebookShare to Pinterest
Labels: Analysis, Ministry
Newer Post Older Post Home