So that was (almost) the 2010 Federal Election. Independent candidate Andrew Wilkie surprisingly won Denison.  I've plotted the two party preferred vote totals for each of the polling booths, below, using data from the AEC, red for Jackson and yellow for Wilkie. It's almost as though there are two electorates; a Labor stronghold in the north and a swarth of Wilkie territory from Creek Road to Kingston.


View Wilkie vs Jackson in Denison in a larger map 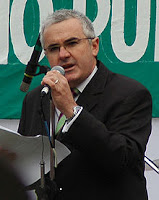 Interestingly Duncan Kerr held Denison for 15 years and than bequeathed it to Jackson with a solid 15% margin.  In this election there were several cross currents, a solid gaffe-free performance from Abbott, disillusionment with Labor's unfulfilled promises, resentment in NSW and QLD with local Labor governments and groundswell of Green voters. Much of this didn't touch Tasmania, which voted solidly for Labor in the House of Reps and at the Senate level.  (Sadly Guy Barnett lost his seat.)  This makes the backlash against Labor in Denison all the more interesting. As I noted before during the election Labor seemed to be treating Denison casually, focusing instead  some cursory attention on Bass and Brandon which were assumed to be more marginal.
Email ThisBlogThis!Share to TwitterShare to FacebookShare to Pinterest
Labels: Maps, Politics, Tasmania
Newer Post Older Post Home