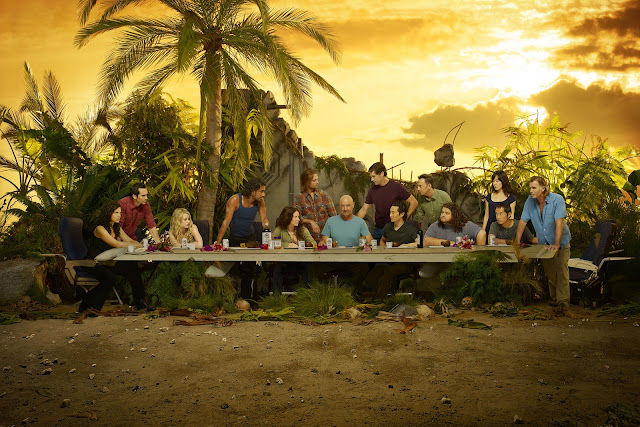 So that was the end of LOST, which Amy and I have watched intermittently over the last six years.  Following the tradition of Twin Peaks, the show is driven by a mystery, why are the survivors stranded on this mysterious island and how will they survive?  LOST is made pleasurable by the complex secondary world, the characterization and a narrative that is larger than individual episodes or seasons.  Surprisingly it's able to do all this without any swearing or nudity, although it's consistently violent.

It turns out that after the plane-crash and all the mis-adventures (false departures, conflict and time travel) some of the survivors do make it conclusively off the island.  The island sits on top of some mysterious power-source that is generally manifest as electromagnetism. This in turn gives people special powers and causes the island to travel through time.  Over time various people are commissioned (Jacob) to protect the island and others try to study (Hanso Corporation) or attempt harness the islands power (Charles Whitmore) but the island remains off the grid, hidden somewhere between Los Angles and Sydney.  The show often used flash-backs and flash-forwards to keep the action rolling and in the final season, showed the characters in what you think is a parallel universe but is actually an after-life or the very beginning of an after-life.  The final scene shows most of the original cast plus a few extras together in some sort of church about to pass into some sort of after-life.

LOST is an important television-show because it explores metaphysical themes, it shows that we belong to a larger story-line then we realize and a more mysterious and exciting world than we assume.  It's also a powerful barometer of western (American-Australian?) culture, revealing that meta-narrative is powerful driving force and that some-sort of moral fabric is assumed but not robustly explored.  Somewhat surprisingly the worldview of the secondary world isn't ultimately very strong and I think this is partly the harvest of a post-modern cultural relativism.  In the long-term it'll be moments, symbols and motifs from LOST that will linger, long after the 'message' or its worldview is forgotten.