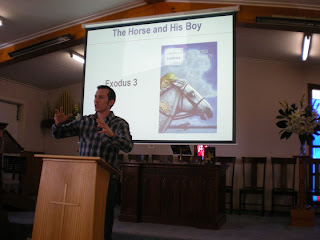 Into the Wardrobe: Exploring the thought and imagination of C. S. Lewis  - Conference Reflections

It was very exciting, I gave my first conference talk at a small but notable conference at Aspendale Presbyterian church.  John Dekker, the minister of Aspendale, convened, I spoke on 'Christian imagery in the Narnian Chronicles', Tony Dekker on 'CS Lewis the Apologist' and John Ballantyne on 'CS Lewis' world view'.  John put the conference together to coincide with the 47th Anniversary of Lewis' death and the release of the third Narnian Chronicles movie.

I got most of my ideas from Alan Jacob's excellent biography of Lewis' imagination and thought life, The Narnian.  I wanted to show in my talk that finding the 'hidden Christian imagery' isn't so much the key, but recognizing the biblical patterns.  This is because as Alan Jacob's points out Lewis was converted on the basis of historical and philosophical presuppositions first and then by Tolkien firing his imagination secondly.   So for example in the picture above I'm explaining the parallels between the story of Moses and the role of God's providence the the role of Aslan in The Horse and his Boy.  Doing the talk (thanks for the invite John!) and hearing the others, has inspired me to put together a bible study series for church.  Most people haven't had a lot of exposure to Lewis' thought and his work offers an excellent vehicle to communicate biblical concepts.
Email ThisBlogThis!Share to TwitterShare to FacebookShare to Pinterest
Labels: CS Lewis, Thinking
Newer Post Older Post Home