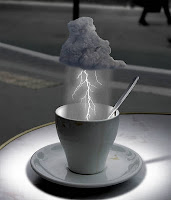 I think "we're facing a classic storm-in-a-teacup-scenario."  Rob Bell of Mars Hill church, once the nice ('nicer' than Driscoll anyway, of a different Mars Hill) young face of the now defunct Emerging Church movement and now a mega-church leader in his own right is about to release a book about universalism: Love Wins.

Based on a few pre-released chapters, a promotional video and the publisher's blurb blogger Justin Taylor sounds the alarm.  "Don't be so suspicious and judgmental" clammers some in the blogeshphere.  The storm in the tea-cup has been partly created by John Piper's breathless condemnation of Bell on Twitter, hardly the location for in-depth analysis or calm reaction.   However Justin is a careful blogger, a real American-evangelical-standout and if you read his article carefully you notice he gives his suspicions but reserves his judgment for the full release later in March.

[Update] Then again come March, I suspect Trevin Wax who blogs at Kingdom People may be right:


Until the book comes out, I don’t think we can accurately label Rob a “universalist.” Based on Rob’s tendency to ask edgy questions and then pull back, I expect that somewhere in the book, Rob will affirm that people who don’t want to be part of God’s kingdom won’t be forced to. In the end, Rob will land somewhere between optimistic inclusivism (most everyone will be saved) and universalism (all will be saved).

This is probably accurate because Bell is often frustratingly fuzzy, Gandalf would not have been impressed!
Email ThisBlogThis!Share to TwitterShare to FacebookShare to Pinterest
Labels: Universalism
Newer Post Older Post Home