'Climate Change and the Communion of Saints' 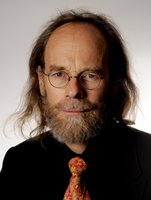 Professor Michael Northcott, of Edinburgh University, School of Divinity gave a public lecture, which I attended, entitled 'Climate Change and the Communion of Saints', at the church where I work, St George's Battery Point.  It was organized by the Diocese of Tasmania and ISCAST.   I have to confess I am a global warming skeptic was looking forward to hearing his talk, he had a lively manner and I enjoyed seeing a wide variety of people attend.  This post is a reflection on his talk and the issues it raises.


Environmental activism as Northcott observed has a long recent history. Clearly with more people consuming more things, ensuring there is fresh food, clean water and shade for everyone is becoming very difficult and discouraging. As I remarked several weeks ago we have a biblical responsibility to care for the environment, it's created by God and we are commanded to manage it responsibly, anticipating it's full restoration in the new heavens and the new earth.  Northcott correctly noted this trajectory, although he raced through his talk and the nuances were difficult to catch.  I agree with his assessment that the harvesting of fossil fuels isn't undertaken in a strategic manner, we're gobbling it up without thinking about future needs.  I also liked his assessment of carbon trading as a form of indulgences, burn a forest in one place and plant some trees elsewhere.


Northcott's two greatest errors lay at the beginning and end of his talk. Firstly, he presented the science of climate change as obvious and settled.  This is difficult because on the one hand the majority of scientists recognize a pattern of global warming, in other words increasing temperature.  For example our own Bureau of Meteorology (BOM) produced this graph: 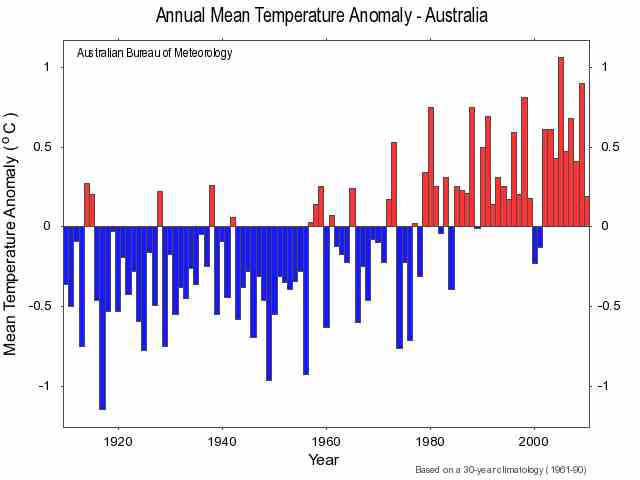 It's difficult as a layman to evaluate this data, with all the factors of collection and analysis to consider.  However I'm aware that correlation does not necessarily equate to causation.  Increased carbon and methane may be part of larger trends well beyond the scope of human industrialization.  Also science is primarily about measurement and prediction.  Pattern recognition is perfectly legitimate but it's not prediction to say after the fact this or that event was caused by global warming.  Interestingly when predictions have been made on the assumption global warming will effect our climate negatively they've sometimes proved to been dramatically wrong, here BOM (on the left) predicted less rain and higher temperatures but as we know the results were different (on the right).

If we are faced with larger power bills on the basis of these predictions, they need to be accurate.  But the stakes are higher, Northcott wants a fundamental change to our civilization, far less flying, far less car travel, phasing out of fossil fuels etc. These are dramatic changes, worthwhile if the theory is true, but we can't make them just based on pattern recognition alone or vague predictions about our grandchildren. That's why I didn't like the way Northcott made it seem the science was settled, I was thinking about causation and correlation, about historical data and about the importance of accurate predictions but these lines of argument weren't addressed.  Neither did I think that 'climate change' was obvious.  There have been worse floods, droughts, cyclones and bush-fires than the ones in recent years, granted we now follow them in graphic real time detail but have they really increased in ferocity because of human industrial activity?
Secondly, Northcott, towards the end of his talk said that radical changes to our lifestyle, perhaps even civilization were needed because of human caused climate change.  This is wrong, radical changes in our life style and civilization are needed because of the good-news about Jesus. Human greed and self-indulgence is the true cause of our lack of environmental stewardship and only the gospel will fix that.  Northcott, while clearly well meaning and motivated by a godly concern for biblical stewardship, seems to have become disproportionately consumed by the issue, he opened with a strange comparison with zealous climate change skeptic Viscount Monckton. There is a strange irony to the way Northcott flies around the world advocating radical changes to civilization, perhaps it's the latent rebellious Marxist in me but I resent the being told "what's good for me is not necessarily good for you."  The science may be proved right and Northcott's argument may be vindicated but I found this implication unsettling.
Current Political Implications 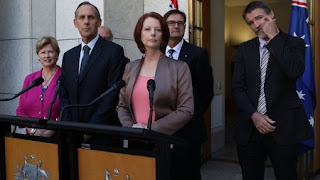 Norhcotte's talk came at an important time, just as Prime Minister Gillard announces the introduction of a new carbon tax.  (Itself a disappointing reinforcement of the idea that politics is a game of deceit with a sort of Orwellian double speak, although it seems few Politicians are immune to it.)  I also wonder how the committee that Flannery heads up will explain the science of climate change and then make the case for a carbon tax.
Thinking Theologically
Basic environmental stewardship isn't up for grabs, there's no moral reason to hurt people or God's creation in order to make a profit.  However the use of resources seems to be more of an opinion. Managing them seems more subjective, I might want to visit an overseas country or sleep in an air-conditioned room. Northcotte wasn't clear at this point but the implication seemed present that the only moral/godly choice was to radically change our civilization.  There was the insinuation that not to do so was "a sin".  For example a slide flashed up at one point quoting Bp Chartes [sp?] saying that "flying was a sin."  I agree that not being good stewards is a sin but Northcotte seems to be shifting the boundaries and that seems unwarranted.
Conclusion
Northcott was by no means offensive, definitely amusing and very easy going.  It's just that I expected a more careful analysis taking into account common counter-arguments and a suggested change that was more grounded in the good news about Jesus rather than the good news about saving the planet. Lionel Windsor over at the Sola Panel sets out a great biblical primer for approaching this issue, I recommend that.
Email ThisBlogThis!Share to TwitterShare to FacebookShare to Pinterest
Labels: Ethics, Politics
Newer Post Older Post Home