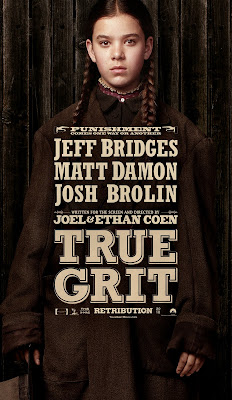 I think my last film review was also a Coen brothers movie, No Country for Old Men, a well-crafted modern western with supernatural overtones and a disappointing conclusion.  True Grit  a remake and an old school western is played very straight by the Coen brothers.  The dialogue is great and the cinematography doesn't get in the way of the story, no peculiar Coen twists.

Mattie's father is killed by a criminal, Sam Chaney who disappears into Indian territory.  Mattie (Elizabeth Marvel) after collecting her father's body to send back East sets out to get revenge by hiring Cogburn (Jeff Bridges) without being precocious in the process. Mattie and heavy-drinking Cogburn set out with the bouffont LaBoeuf (Matt Damon) in tow.  There are some some funny moments of rivalry between Cogburn and LaBoeuf and it's great watching Bridges play the grizzled and canny Cogburn.   However Cogburn gets drunk on a stash of whiskey and Mattie is captured by Sam Chaney's gang.  In the final battle Cogburn and LaBoeuf rescue Mattie and she shoots Chaney.  Unfortunately she stumbles and falls into a snake bit and is bitten before being rescued.  In a brutal but strangely poignant scene Cogburn makes a desperate trip to a nearby outpost in order to save Mattie.


Mattie survives and then there is an awkward montage showing Mattie as an old maid trying to track Cogburn down and then visiting his grave, the closing shot of the movie.  Now admittedly this isn't as horrible as the conclusion to No Country for Old Men but it's so emotionally incongruent with the rest of the film, lacking the rest of the film's pathos and even cinematic quality.  Perhaps the end of story is meant to show that revenge has a sour aftertaste but I expected higher stakes, Cogburn dying as he carried Mattie to the outpost.

Now I appreciate the fact that the Coen brothers played it straight and they are undoubtedly aware of some this world's deeper patterns, aware of the emotional power they can produce cinemantically.  However they inhabit a strange moral universe, it's as though they are aware of a metaphysical world around them but they don't want to commit to direction, they don't want to give a clear verdict.  Why can't they let Cogburn make a sacrifice, why is he and LaBoeuf pulled suddenly from the story and is this really how revenge works?  Again I'm left admiring the story but shaking my head.
Email ThisBlogThis!Share to TwitterShare to FacebookShare to Pinterest
Labels: Movie Reviews
Newer Post Older Post Home