The ideological argument for the carbon tax, is that we need it for the sake of global politics, to be seen to making an effort and for the sake of the planet, to be doing something albeit only a little. This could be labelled 'the per-capita argument'. On the other-hand the sobering reality of 'the share of the total emissions argument' is that a carbon tax will do little if anything to change the actual environmental reality.  This is demonstrated by this graph from the ABC. 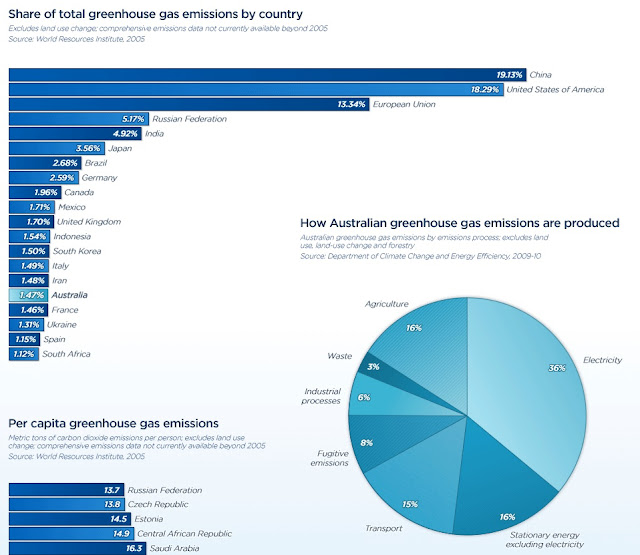 Let's assume the science of human induced global warming is roughly true, that there's a correlation between increased carbon and increased global temperatures and we need to do something sensible to manage it. The current Australian government has decided to introduce a carbon tax, it's personal effects can be roughly measured here.
My difficulty is with human nature and while I acknowledge the difficulties of governing in a fallen world surely there are schemes that could be created to reduce greenhouse gas emissions that didn't require a clumsy tax?  (What about a radically comprehensive train system and targeting the three dirtiest power stations?) Speaking broadly, some nations, even lovely ones like Russia may simply say "yes we have a carbon tax" while not making any changes.  Other nations like say China may say "at this point a carbon tax isn't in our national interest for the next ten years."  Australia instead of leading a global revolution is left to hang out to dry economically. Then on a national level a large bureaucratic system is open to fraud and mismanagement.  Practically the ideological aim of the carbon tax is negated by it's implementation both globally and locally.
[My prediction is that the carbon tax is here to stay.  There'll be some token global scheme and some future global crisis; such as a war or a disaster that reduces emissions and people will assume the scheme has caused the reduction.  Then a future conservative government facing a rising cost of living and whatever unpleasantness is on the horizon will nationalise the carbon trading market and reduce the price of carbon.]
Email ThisBlogThis!Share to TwitterShare to FacebookShare to Pinterest
Labels: Australia, Politics, Remarks
Newer Post Older Post Home