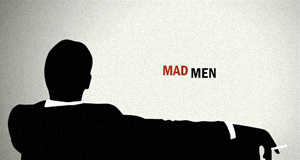 Mad Men is a nihilistic show specialising in representing the edge of social and cultural change through the lens of an Advertising agency during the 1960s.  Apparently millions are spent every episode getting costumes and props exactly right. It's centered around the tragic excess of Don Draper, a self made executive and creative genius.  Mad Men is also part of a larger but looser contemporary genre of shows and movies centered on a protagonist who is the anti-hero, an up market Philip Marlow.

One of the themes of the show is the use of spin, both professionally as the ad agencies sell products and personally as characters attempt to make and keep particular personas.  Today we wince at the blatant self-promotion and the kitsch of Hollywood hype but it's sister is the slicker New York 1960's Mad Men version. And I think while we'd frown on the spin doctors from The Hollowmen and generally disdain Hollywood style self-promotion, those of us who deal regularly with intangibles are prone to spin. A farmer points to his field or a nurse to their patient but how do politicians, academics, Generals, managers and ministers quantify what they do let alone present their particular solution as more favorable than another?

This isn't to say ideas, stratagems, feelings and conversations aren't valuable, they are, because they shape where and why the ditches should be dug and the fire preserved. However I think those of use who deal in intangibles need to be continually aware of the dangers of misusing promotion, of buying into a society that is often unconscious of the way culture works, the way a city nurtures people, animals and ideas together.
Email ThisBlogThis!Share to TwitterShare to FacebookShare to Pinterest
Labels: Movie Reviews, Reflection
Newer Post Older Post Home