The Resurrection of Jesus shows that the consequence of sin as being defeated, its sting removed (1 Cor 15:54-55). While the Atonement shows us the condemnation of sin is taken away in the death of Jesus, the story is incomplete without Jesus coming back to life. It's interesting that the Apostle Paul makes the Resurrection explicitly Apologetic, if Jesus was not raised then Christianity is just another form of moral turpitude (1 Cor 15:3-7 & 32). 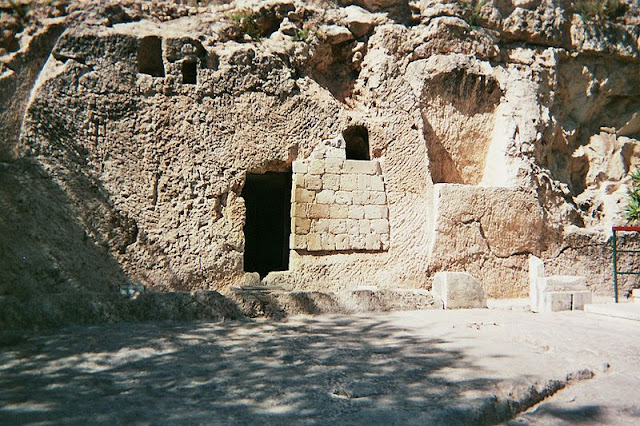 ['The Garden Tomb', Jerusalem]
The Resurrection is the culmination of a long Old Testament trajectory.  Through his original act of rebellion Adam causes death to reign over humanity (1 Cor 15:22). The emphasis on lifespans (Ecclesiastes) and the number of years we live (Genesis 5) underscores this reign.  But God continually gives promises about an abundant life that without life after death seems grandiose and hollow. Tantalising glimpses are given of our eternal future (Ezekiel 37:1-10) but it's not until Daniel ushers in the new Hellenistic epoch (Daniel 12:1-4) that we start to realise the shape of Resurrection.

The doctrine of Glorification depends entirely on the Resurrection and doctrines such as Sanctification or Regeneration only make sense if the Resurrection is true because they are progressive, they are going somewhere, eternal resurrected life with Jesus.
Email ThisBlogThis!Share to TwitterShare to FacebookShare to Pinterest
Labels: Apologetics, Jesus, Ordo Salutis
Newer Post Older Post Home